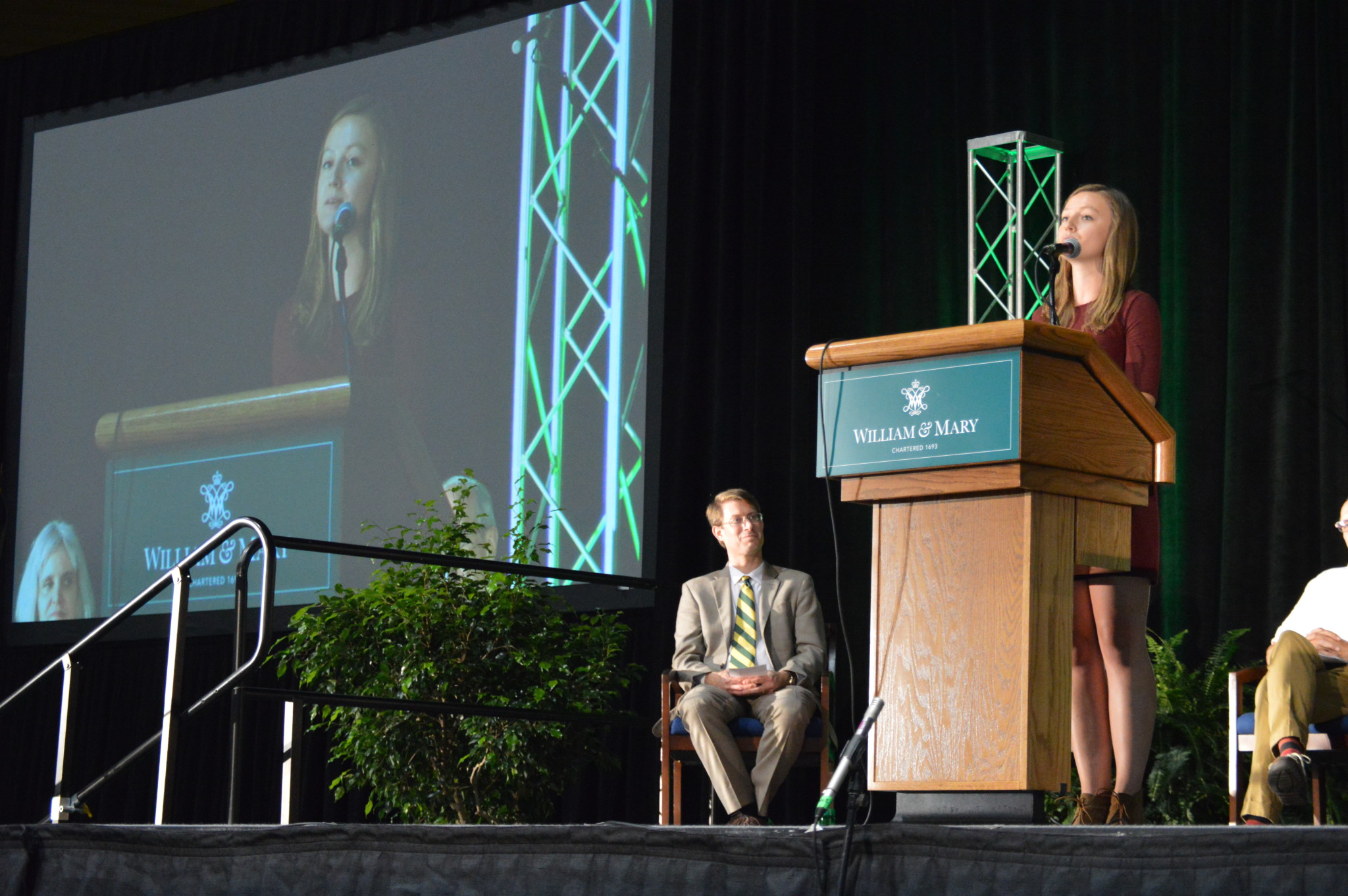 Kaplan Arena was full of new students, parents and orientation aides waiting to be welcomed by administrators ­­­Aug. 21, the first day of 2015 orientation.

Associate Provost for Enrollment and Dean of Admission Tim Wolfe ’95 M.Ed. ’01 welcomed all new students to the College of William and Mary. As is tradition, each hall was called on to cheer, and each attempted to be the loudest and show the most pride in their new home.

“Today is an extraordinary day,” Wolfe said. “From this point onward you will be walking a path of greatness. Never forget that being on this path is an honor.”

“During your time at William and Mary, take time to create, to challenge, to innovate, and to offer insights. Take time to laugh, to express your values, to rest, to wonder and to care about someone else,” Ambler said.

College President Taylor Reveley spoke next, commending the students on their decision to attend the College. He then introduced a welcome video from the admissions office, which featured students describing what the College did for them.

“New William and Mary undergraduates — freshmen, transfers — we really are delighted and honored that you have chosen to join us,” Reveley said. “You certainly, collectively, make up one of the most carefully selected and richly talented groups of freshmen and transfer students in the United States. And you come from across the Commonwealth, from around the country and really from around the world.”

Reveley spoke to the crowd about what he thinks makes the College amazing. First, he discussed its rich age, history and beginnings — the College established the first chapter of Phi Beta Kappa, has the oldest law school in America and was the first to create student governed honor councils. Second, he explained what it means to be a public ivy, and said that he believes that the College is the only institution that deserves the title. Reveley said that the others do not have the same qualities as the College, a small liberal arts college that is devoted to undergraduate teaching, yet is also an extensive research university. According to Reveley, the College also consistently produces good citizens and effective leaders.

Dean of the faculty of Arts and Sciences Kate Conley addressed the parents more so than students. Mayor of Williamsburg Clyde Haulman spoke after her remarks.

“Just as we embrace cliffhangers in adventure books, excited for what will come next, we must do the same in our college stories,” Galt said.

Galt spoke to the students about the lasting friendships of their halls and the stories that will be their time at the College. Comparing the College to a book, Galt said that each student makes up a chapter — one they have creative control over.

“With choice comes an inherent uncertainty and fear of failure. Like a good cliffhanger, much of college will be unfamiliar territory,” Galt said. “But, just as we embrace cliffhangers in adventure books, excited for what will come next, we must do the same in our college stories.”

Galt spoke of different types of stories the college could be — an adventure, a romance or a comedy. She shared with the audience some of her experiences as a freshman, and reflected that the relationships she made had the largest impact on her first year.

“It doesn’t take the Crim Dell to show you that people fall in love at William and Mary,” Galt said. “Be it with the campus, a subject, an individual, or a new family, each of you will find the capacity to love and be loved in your time here at the College, and I hope that this inspires you.”

The next speaker, Vice President for Student Affairs Ginger Ambler ’88 Ph.D. ’06, said she agreed that relationships are important. She said that people make the difference in the time spent at college and also advised new students to take advantage of the opportunities presented to them.

“I urge each of you to seize the opportunities as they arise, both those that you anticipate now, and especially those that will catch you by surprise,” Ambler said. “Try something new, listen to and talk with someone whose perspectives are different from yours. Find ways to serve others. During your time at William and Mary, take time to create, to challenge, to innovate, and to offer insights. Take time to laugh, to express your values, to rest, to wonder and to care about someone else.”