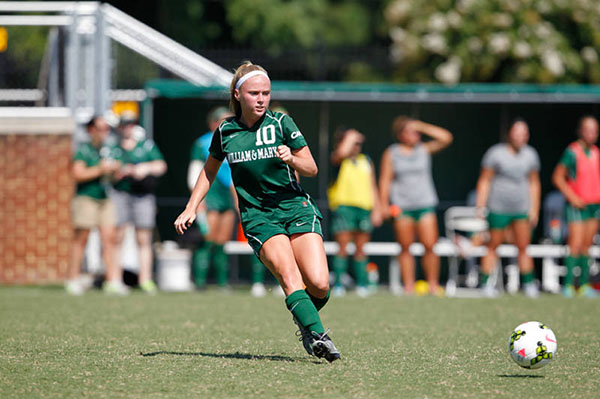 Due to website maintenance, this article could not be published until August 31st. Two additional games have transpired and the Tribe is now 3-1.

Women’s soccer kicked off their season with a bang as William and Mary began its 2015 campaign on the road at the Fairfield Inn by Marriott James Madison University Invite in Harrisonburg, Va. The Tribe (2-0) defeated Seton Hall by a 5-1 margin Friday before downing No. 25 Georgetown 3-0 Sunday.

The College entered the pitch confidently Friday, scoring the first goal of the season within the first 90 seconds off the foot of senior forward Samantha Cordum, assisted by sophomore defender Elysse Branton via through ball to right side. About 10 minutes later, Cordum fired once again, but the Pirates’ keeper deflected the shot. The deflection worked in the Tribe’s favor, as the ball sailed straight to sophomore midfielder Rachel Moore who then drove the ball into the net for a 2-0 lead. As the first half whistle blew, the score remained at 2-0. The Tribe outshot Seton Hall (0-2) 13-2 during those 45 minutes.

Sophomore forward Sami Grasso scored an unassisted goal off a keeper deflection in the 54th minute, marking three unanswered goals in the contest for the College. In the next minute, a yellow card was given to senior keeper Caroline Casey, resulting in a Seton Hall penalty kick. The Pirates found their way to the scoreboard, bringing the score to 3-1.

The Tribe proved undeterred by Seton Hall’s penalty kick, as freshman midfielder Mackenzie Kober chalked up her first collegiate goal at 66 minutes and 27 seconds. Just 17 seconds later, Grasso added her second goal of the match as the ball rolled into the net during a collision between the Pirates’ keeper and a defender. Kober received credit for the assist on Grasso’s second goal.

In the aftermath of the 67th minute, the College led 5-1. Seton Hall never recovered, and the Tribe took its first victory of the year. The College matched its first half shots at 13, outshooting the Pirates 26-5 over the full 90 minutes and 10-0 in shots on goal. Kober’s efforts led to her selection as CAA Rookie of the Week Monday.

Coming fresh off the victory earlier in the weekend, the Tribe continued the momentum into its first game against a nationally ranked opponent this year, No. 25 Georgetown, Sunday afternoon. Similar to the game against Seton Hall, the College seized an early 1-0 lead, as Moore scored off a header in the first 10 minutes for her second goal of the season. Senior midfielder Nicole Baxter received credit for the assist.

After an exchange of several unproductive shots by both teams, the Hoyas (1-1) committed a foul in the 42nd minute of the match, granting the Tribe a penalty kick. Baxter successfully took the penalty kick for her first goal of the season to increase the lead to 2-0. Despite trailing 2-0, Georgetown held the advantage in shots at 7-4 at halftime, a testament to the College’s strong defensive play.

The second half was largely uneventful except for the Tribe’s third goal of the game; Cordum earned her second goal this year in the 79th minute off a through ball to the middle of the net, assisted by Baxter. Georgetown remained unable to respond to the College’s defense and fell in a 3-0 shutout to the unranked Tribe squad. The Hoyas outshot the College 17-6 and 5-3 on shots on goal, but Casey saved all five shots successfully during the match, while the Georgetown keeper saved a single shot.

The win brings the Tribe to a 2-0 record, and certainly marks an unusually strong start as the College had not beaten a ranked team since September 2011, when it also defeated then No. 13 Georgetown.

The College’s next contest is the home opener against East Carolina this Friday, Aug. 28. Kickoff at Martin Family Stadium is scheduled for 7 p.m.