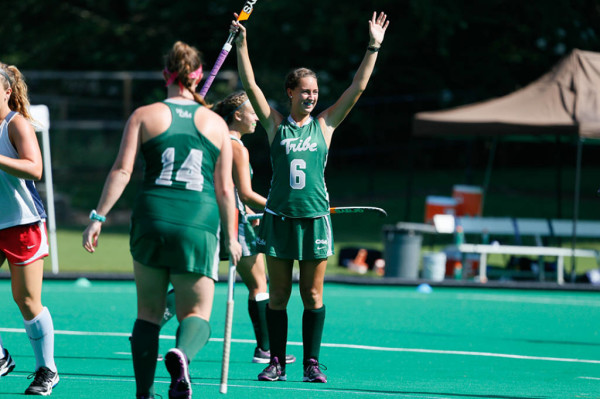 In the span of less than two minutes, Ohio broke down William and Mary’s defense and fired a pair of shots past senior goalkeeper Meredith Savage, the second goal thudding into the back cage as time expired. What would have been a devastating conclusion to most games was shrugged off by head coach Tess Ellis as something along the lines of a minor inconvenience.

Ohio’s late surge propped up the final score to 5-3 in favor of the College (3-1) this past Friday at Busch Field in Williamsburg, although the Tribe’s victory had been assured in the opening half. The first home game of the season served as a showcase of the Tribe’s premier offense, as the Bobcats (2-1) proved helpless against the continuous fast breaks and quick passing.

Ohio technically placed above the Tribe in the Lock Haven Tournament last weekend, as the Tribe finished third after a loss to eventual-champion Lock Haven, while Ohio faced Lock Haven in the finals. Ohio did not face the Tribe, and both teams defeated St. Francis.

The College rattled off the first ten shots of the contest, with the inevitable goal finally slipping past the Ohio keeper in the twelfth minute off the stick of sophomore forward Cammie Lloyd. Sophomore midfielder Erin Menges guided the ball down the far left corner, rocketing the ball across to the goaline, while Lloyd sprinted onto the ball.

“I just got a tip on {the ball} and it went in,” Lloyd said after the game. “We all connected a lot better this game than we did last weekend.”

“We all connected a lot better this game than we did last weekend.”

However Lloyd was far from satisfied with just the one goal. With a performance reminiscent of a certain Carli Lloyd, despite the difference in sport, Cammie Lloyd fired in the Tribe’s next two scores to finish with a hat-trick for the Tribe, the first in her collegiate career. Her second goal came off yet another fast break for the Tribe, as the offense exploited a five on three advantage. Senior forward Pippin Saunders, after maneuvering around her defender, placed a perfect pass before the defensive slide arrived, the ball skipping just in front of Lloyd with just the goalkeeper to beat. Lloyd faked a shot, pulled a full spin move while maintaining control and guided the ball in for the score with the helpless goalie prone and nearly a yard behind her in the 18th minute for the 2-0 lead.

Ohio did show signs of life with a penalty shot score at the 24th minute. However the Bobcats had no other offensive success to speak of against the Tribe starters. The basis of Ohio’s attack centered around Kendall Ballard, a physical forward at an imposing 5’11”. While Ballard could muscle past a single Tribe defender, the College defense slid on time, and effectively swarmed Ballard to steal the possession, sometimes with as many as four players involved.

The Tribe poured on the goals, with Lloyd’s third coming off a fast break initiated by Saunders. After breaking away from her defender, Saunders fired a long pass to Lloyd, who had a day-and-a-half lead on her defender. Lloyd’s initial shot was rejected, but she collected the rebound for the score in the 26th minute. Lloyd’s score marked the first hat-trick for the College since 2012.

Saunders added the fourth goal with under two minutes in the half. A shot hit the Ohio keeper squarely after she dived, but Saunders raced up and in a single fluid motion stole the ball away from the goalkeeper and placed it neatly in the goal.

Menges tacked on the fifth score with a high and hard shot ten minutes into the 2nd half. The rest was history, as the Tribe worked every backup into the final 24 minutes of the blowout victory.

Central Michigan probably wouldn’t have come to Busch Field in Williamsburg had they checked the forecast ahead of time. Not only did it rain during the game, but William and Mary (3-1) also drenched the Chippewas (0-4) in a 6-1 thrashing Sunday afternoon.

The Tribe notched its highest point total since the Sept. 26, 8-4 win last season over Appalachian State. As has become a trend, the College offense was fueled by Saunders, who fired in the first two goals while adding an assist to the fifth Tribe tally.

Although the College took twenty minutes to pierce the Chippewa defense, Saunders finally broke the stalemate with a hard shot off a penalty opportunity in the 23rd minute. Just fifteen seconds later Saunders charged down the right side of the field and wound up for another shot, the ball careening past the goalie for her second score.

Lloyd kept the pressure on Central Michigan, firing a one-touch shot off a precision pass from Menges at the 25th minute. With a 3-0 lead at half, the Tribe was determined to clinch the win, dominating the Chippewas in shots (10-1) and penalty chances (5-0). Menges created another opportunity for the Tribe in the 38th minute, crossing to sophomore forward Emma MacLeod for the fourth Tribe goal. Saunders provided an assist to the generous Menges for the fifth Tribe goal at the 61st minute off a penalty corner.

Junior midfielder Olivia Hajek tacked on the finishing touch in the 65th minute off an assist from senior midfielder Esty Byrd. However, the Chippewas were able to spoil the shutout (which would’ve been the first since October 26th of last season) in junk time, notching the goal with zeros on the clock. It was the second time this weekend the Tribe surrendered a goal as time expired, yet both were resounding victories.

Up next for the Tribe is a road trip to No. 16 Old Dominion University (3-1) in Norfolk Friday, with the game starting at 7 p.m.