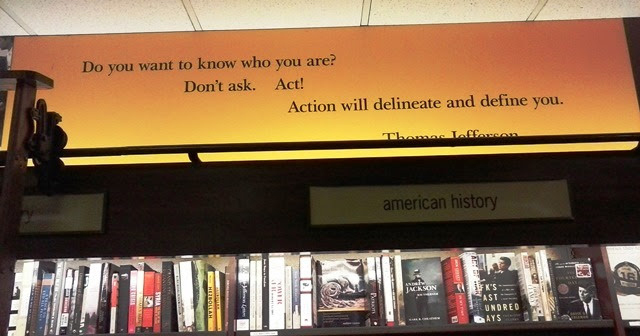 Every fall, thousands of students and parents flock to the campus bookstore. In their frenzy for Tribe gear and overpriced textbooks, they might miss a row of inspirational quotes from some of the College of William and Mary’s most esteemed alumni, including Jon Stewart ‘84, John Marshall, Henry Clay and Thomas Jefferson. One in particular, attributed to Jefferson, bears mentioning: “Don’t ask. Act! Action will delineate and define you.” If something about that quote sounds off to you, it’s because Jefferson didn’t say it. A simple Google search reveals (in the first entry) that the quote belongs to 20th century Polish philosopher Witold Gombrowicz. For a school that invests so much of its prestige and public image in Jefferson, this oversight is embarrassing and ought to be corrected immediately.

I confess that I didn’t notice this at first. My dad first brought it to my attention when I was a freshman more concerned with surviving orientation than historical accuracy. One Family Weekend, he even approached President Reveley about it, who told him, “This is the kind of problem I can actually fix around here.” I have emailed the Director of Auxiliary Services, Cindy Glavas, who said she would ask the bookstore to fix the error. Both my dad and I have brought it to the attention of campus bookstore employees. Three years later, the quote remains.

This may be a comically insignificant problem, but it’s still worth consideration. The campus bookstore is in Colonial Williamsburg, where hundreds of people earn their livelihoods attempting to faithfully recreate history and hundreds of people visit daily to learn about the history. The quote does a disservice to those men and women and the mission of Colonial Williamsburg.

“Furthermore, the responsibility of any bookstore should be to educate the masses — even more so for a college bookstore.”

Furthermore, the responsibility of any bookstore should be to educate the masses — even more so for a college bookstore. When it disseminates false information, it fails miserably in its duty. But when it’s the College’s bookstore propagating a clearly fake Jefferson quote, the result is an almost cosmic joke.

Granted, I have mixed feelings about Jefferson. While he advocated for gradual emancipation and theoretically opposed slavery, he owned hundreds of slaves, fathering children with one of them and outright refusing to acknowledge the intellectual abilities of blacks. Yet he helped lay the philosophical groundwork for American democracy. His writings are an essential part of our national history and identity. Many of his quotes probably line the walls of campus bookstores across the country, and deservedly so, albeit they are likely accurate quotes.

“Let’s do right by Colonial Williamsburg, the College and Jefferson himself and replace the quote with something Jefferson actually said.”

Let’s do right by Colonial Williamsburg, the College and Jefferson himself and replace the quote with something Jefferson actually said. The campus bookstore should correct its mistake if not for any other reason than providing accurate historical information. It creates skepticism of both the College and Colonial Williamsburg from those who recognize the quote is not said by Jefferson and misleads all those who read the quote thinking the words are Jefferson’s. The world is full of vast and intractable problems. This is one we can easily solve.

Note: As of Sept. 10, the William and Mary Bookstore has removed the incorrect quote.