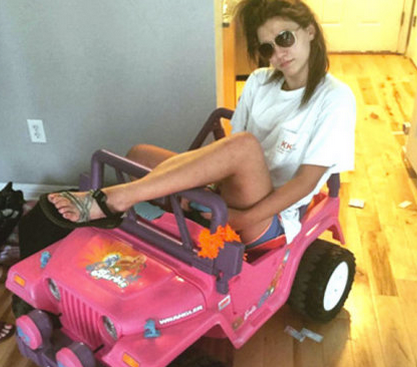 If you haven’t stumbled upon it in some sorority-decoupaged corner of the Internet yet, there is a 20-year old girl at Texas State who is showing the DMV who’s boss in a bright pink Barbie Jeep Wrangler. After getting a DWI arrest and an indefinite license suspension, the Texas junior Tara Monroe refused to let her misfortune stop her from rolling around campus in style.

Monroe refused a breathalyzer test after a Waka Flocka concert on March 4, which led to the immediate suspension of her license, and, apparently, a pretty upset father. He allegedly drove from her hometown of Kingwood to San Marcos to take her car and leave her with a bike to get around campus.

“In the process, however, some sites tried to spin the story as if Monroe didn’t get the DWI that landed her in this situation.”

Monroe found her circumstances less than satisfactory, stating, “Riding a bike around campus sucks. Like really sucks.” So after a little brainstorming and some Craigslist scanning, Monroe came upon a perfect, slightly used, $60 Barbie Jeep in the area.

With her new ride, Monroe became an instant sensation on campus. Everyone who saw her made sure to post a Snap story or tweet a picture of the young lady killing the game. Her story quickly permeated the entirety of the campus, and soon the Internet, with everyone sharing her bold choice of transportation on social media.

In the process, however, some sites tried to spin the story as if Monroe didn’t get the DWI that landed her in this situation. While the way she handled her less than favorable position is hilarious, it is important to remember that driving while intoxicated is no laughing matter. There are always incredible dangers that come with getting behind a wheel while under the influence.

“They had an opportunity to reiterate the fact that driving intoxicated is illegal, and maybe even dig deeper and question how seriously college students take the issue these days.”

Yes, no one was hurt through her poor decision, but that does not negate the fact that the media should have taken this issue more seriously. They had an opportunity to reiterate the fact that driving intoxicated is illegal, and maybe even dig deeper and question how seriously college students take the issue these days. But, instead they went the route of making this sensationalized news, news that people will laugh about rather than shake their heads in disbelief that a young adult could behave so irresponsibly and then poke fun at her situation.

Monroe did not properly face the seriousness of her situation, she instead acted like it really was not an issue at all. The media did not need to follow in the steps of this 20-year old’s poor choice.

“Without a doubt, Monroe’s clever problem solving is something to be envied, but her decision-making definitely is not.”

Without a doubt, Monroe’s clever problem solving is something to be envied, but her decision-making definitely is not. If there is anything to be taken away from this Internet sensation, it’s that drinking and driving should not be taken lightly. While it’s funny to see, being stuck with a Barbie Jeep that only hits five miles per hour probably wouldn’t be as fun.

But, if we see a Barbie Jeep fad hit our campus soon, we know exactly who to look to for the blame. Although, as a sophomore without a car, Monroe seems more and more like a genius as I trek from Blair Hall to the business school in less than 10 minutes. Maybe I’ll snag a Charlene for myself one of these days.