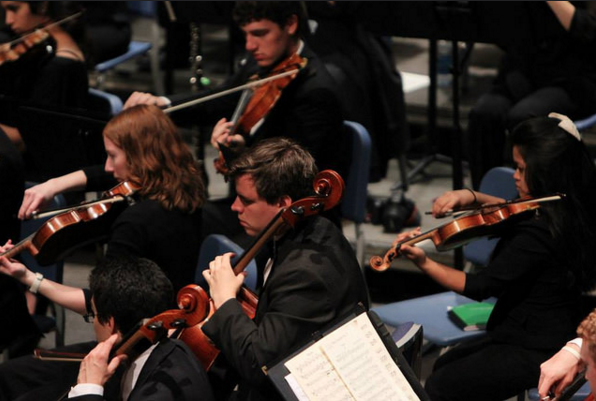 Under the musical direction of David Grandis, the William and Mary Symphony Orchestra combined an engaging American orchestral repertoire with eclectic costumes to create an entertaining Halloween concert without sacrificing musical depth.

The concert began with a piercing unison between the woodwinds and high strings, followed by a resonant response from the brass in Aaron Copland’s “Outdoor Adventure.” The crispness of the transitions between sections and tempos produced a spirited and disciplined sound. Originally written for a youth orchestra, this piece was well-suited to the players on stage.

The program then moved on to a lesser-known American work. “Spirituals,” by Morton Gould, portrays different aspects of the American southern experience by drawing on African American spirituals. The string section was the steersman of the piece and demonstrated considerable command of dynamics and style. However, after a compelling ending to the first two movements — Proclamation and Sermon — the control exhibited throughout the next three movements was undermined by endings that felt abrupt and not properly synchronized.

“The Three Dances” by Leonard Bernstein features three movements that vary from witty to sensual to rugged. Adapted from his first musical “On the Town,” the pieces follow the story of American soldiers on a 24-hour leave in New York City during World War II. Though the jazzy motifs seemed forced at first, the orchestra quickly regained control, navigating the changes in meter and rhythm convincingly in “The Great Lover.” The next movement, “Lonely Town,” was reflective, effectively portraying the bittersweet nostalgia of American soldiers experiencing normalcy for a brief moment. The orchestra performed the motif of the tenths that opened the piece and returned at its closing in a sincere manner that left the listener still humming the piece after its finish. The solos in “Times Square, 1944” were exciting and coy without detracting from the cohesion of the orchestra. The piece was pure enjoyment through jazz motifs that ranged from easy-going and humorous to persistent and exhilarating. If some of the changes between tempo were not entirely cohesive, the spirit and the clear enjoyment of the orchestra members effectively portrayed the bustle and allure of New York City.

After an intermission, during which audience members in costume congregated up front to compete for top prize in the show’s costume contest, the orchestra regrouped for Aaron Copland’s “Appalachian Spring.” The beginning section was reverent, exhibiting dynamic and bowing control in phrases that were simultaneously stark and tender. Although the slower sections were more controlled, the players appeared to have difficulty staying in time with the conductor during the faster sections. The metrically complex phrases ended up feeling more frantic than exuberant and spontaneous. The end was more compelling, using dynamic swells and tempo fluctuations to highlight the return of the beginning motif, this time more deliberate and reflective.

Featuring several of his top jazz hits including “I Got Rhythm” and “Embraceable You,” Overture to “Girl Crazy” by George Gershwin reflects the romanticism and excitement of New York in the 1930s. Exciting and unapologetic, the orchestra transitioned between different sections with dexterity and humor. Both the audience and the orchestra swayed along as dynamic and tempo control allowed the piece to avoid sounding hectic and retain its frisky, playful energy.

Throughout the program, Grandis’ conducting was clear, alternating between fluid and crisp depending on the character of the music. Exhibiting a conservative use of motion, Grandis was deferential to the compositions, providing a focal point for the orchestra without detracting audience attention from the music.  The orchestra could have benefitted from watching him more closely for cues and tempo changes, especially during the faster, more complicated endings of pieces.

After the show, the costume contest winner was announced. Despite competition from Sally Ride, Cinderella and a Frappuccino, Father Christmas provided an interpretive conducting rendition of John Philip Sousa’s march “The Stars and Stripes Forever.” The orchestra was receptive to his unorthodox strategies and produced a spirited, grandiose finale.

Overall the Halloween concert provided an exciting, varied sample of the American experience between 1930 and 1947 from frontier-inspired music to spirituals and jazz. The William and Mary Symphony Orchestra navigated these different themes with musical dexterity and insight, performing a concert that was stimulating and engaging.