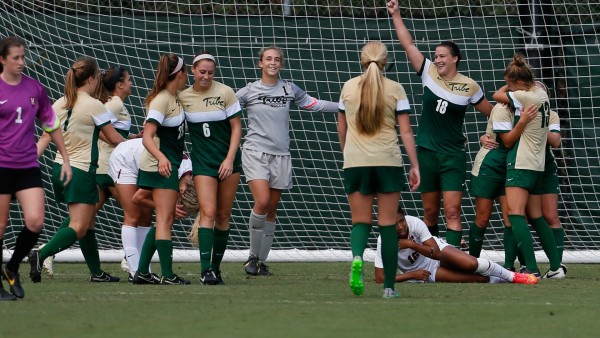 Senior forward Katie Johnston had no intentions of playing her last game for the William and Mary Friday night at Hofstra. In the No. 2-seed vs No. 3-seed matchup of the favored Tribe (14-3-2, 7-1-1 CAA) against North Carolina — Wilmington (14-6-1, 6-2-1 CAA), Johnston jumped up for a header off a corner kick in the 47th minute to send the ball into the left side of the net for the College’s 1-0 victory in the Colonial Athletic Association championship semi-finals, advancing the squad to Sunday’s finals.

Senior midfielder Nicole Baxter sent in the corner and Johnston did the rest to notch the only goal of the game. However, the Tribe had a litany of chances prior to the goal, as it outshot the Seahawks 13-7 on the game, with a 4-2 advantage in shots on frame.

Containing the explosive UNCW offense proved to be no easy task for the Tribe, as senior keeper Caroline Casey dove for a clutch save in the closing seconds of the first half. The Seahawks steamrolled Delaware in the quarterfinals to the tune of a 4-0 shutout, but theysimply could not get their offense in gear against the stiff College defense. Entering the contest, UNCW ranked No. 2 in the CAA for shots on goal per game, averaging 14.81. UNCW also converted more shots than anyone else in the CAA, ranking No. 1 in goals with 48 on the year, a full 11 goals more than No. 3 scoring William and Mary.

The College defense stood up to the challenge as they have all season, notching its 11th shutout of the 2015 campaign.

However, the College defense stood up to the challenge as they have all season, notching its 11th shutout of the 2015 campaign. The Tribe edged the Seahawks by an identical score in the Oct. 11 senior day game in Williamsburg, Va., with the game deciding goal being scored by junior back Clara Logsden. Last month’s victory was far from certain as UNCW outshot the College 8-3 and had a 3-0 advantage in corner kicks as the Seahawks dominated every major statistical category.

The College flipped the script on all but the score in the playoff matchup. On Friday, the Tribe proved the better team in every category, including penalties (11-5) and cornerkicks (7-4.)

With the victory, the Tribe advances to the CAA finals for the first time since 2011, when the College defeated Virginia Commonwealth 1-0 to win the conference and advance to the NCAA tournament, where the Tribe was defeated 4-1 by the North Carolina Tar Heels. The Tribe has qualified for the CAA playoffs every year since, but never advanced past the semi-final round.

The Tribe will face a surprising James Madison team that upset No. 1-seeded Hofstra in the semifinals Friday night in 1-0 double-overtime thriller,

In the finals, the Tribe will face a surprising James Madison team that upset No. 1-seeded Hofstra in the semifinals Friday night in 1-0 double-overtime thriller, the second consecutive overtime win for the No. 4 seeded Dukes. Hofstra featured the No. 2 offense in the CAA and handed the Tribe its only conference loss by a 2-1 score in Williamsburg on Sept 25. The Dukes and the Tribe previously tied in a late regular season in a 1-1 match in Harrisonburg, Va. James Madison made its last finals appearance in 2013 as the top seed, losing 3-1 to Northeastern.

The championship match is scheduled for 2:30 p.m. in Hempstead, N.Y., and will be broadcast online and on American Sports Network.