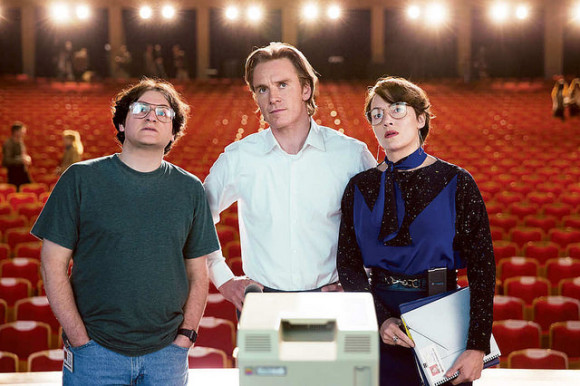 The majority of “Steve Jobs” takes place in three approximately one-hour windows in 1984, 1988 and 1998, right before the launches of the Macintosh 128k, the NeXT Computer and, finally, the iMac. The theme of chaos before each launch is crystallized when Steve Jobs (Michael Fassbender) sighs and tells his colleague and confidant Joanna Hoffman (Kate Winslet), “It’s like five minutes before every launch everyone goes to the bar and then tells me what they really think of me.” Several flashbacks are sprinkled throughout the film, including the iconic founding of Apple in Jobs’ parents’ garage in Los Altos, California, as well as the “firing” of Jobs after the commercial failure of the Macintosh.

Jobs’ ideals are made clear through his unrelenting devotion to a “closed system,” denying customization of the Macintosh, NeXT and iMac computers.

The Sculley and Jobs relationship is one of rival ideologies. Sculley is trying to run a company that is profitable, while Jobs is more focused on what he believes to be the future. Jobs’ ideals are made clear through his unrelenting devotion to a “closed system,” denying customization of the Macintosh, NeXT and iMac computers. Sculley understood at the time of the Macintosh’s release that a closed system fatally inhibits sales. This is just one of the many examples of Jobs’ futuristic vision getting in the way of immediate financial success of the earliest Apple computers. When Jobs is voted out by the shareholders in an ultimatum, Jobs exclaims, “I sat in a garage and invented the future because artists lead and hacks ask for a show of hands.”

Another major facet of the film is Jobs’ friendship with Steve Wozniak. Throughout the film, Wozniak seeks recognition from Jobs for his part in starting the company as well as creating the Apple II computer. The Apple II was the company’s first commercial product that had been funding the Macintosh. Jobs had very little to do with its design and function and refused to publicly acknowledge Wozniak’s contribution at the launch of the Macintosh in ‘84. Before the launch of the NeXT, Wozniak and Jobs have a heated conversation in the orchestra bay of Davies Symphony Hall in San Francisco. At this point, Jobs has gained incredible fame and is recognized as a genius while Wozniak remains unknown. Feeling slighted, Wozniak lashes out at his friend saying, “You can’t write code. You’re not an engineer. You’re not a designer. You can’t put a hammer to a nail. I built the circuit board … What do you do?” Boyle and Sorkin uncover another piece of Jobs’ persona when he responds, “I play the orchestra. And you’re a good musician. You sit right there (pointing to an empty chair). You’re the best in your row.”

Every human being who has used an Apple product is aware of Steve Jobs’ brilliance and innovation.

Finally there is the relationship between Jobs and his daughter, Lisa Brennan. In 1984, Jobs refuses to acknowledge any relation to the little girl, citing a “28 percent chance” that her father could be any man in America. In the scene before the iMac launch in 1998, it is revealed that Jobs has refused to pay Lisa’s college tuition fees. This aspect of Jobs’ life is the most complicated and raises the most questions about his moral standing and legacy. However, in the film’s dramatic culminating scene Jobs seems to come to terms with his daughter and they share a tender moment together.

“Steve Jobs” presents a muddled picture of a man most people want so desperately to celebrate and admire. Jobs’ former friends, colleagues and family have hotly disputed the facts of the film; however, in a biopic do the details matter as much as the attitude? Every human being who has used an Apple product is aware of Steve Jobs’ brilliance and innovation. What Danny Boyle and Aaron Sorkin have done is make us aware of his complexity. Whether or not the drama is 100 percent accurate, “Steve Jobs” is an immersive and intriguing exploration into the character of the most influential businessman of the past five decades.