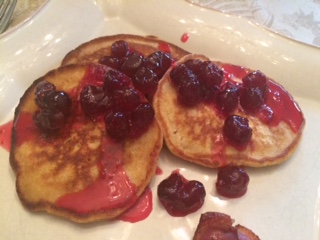 My grandmother’s cooking, a product of the Great Depression with a heavy 1950s casserole and Jell-O salad influence, was either hit or miss. On Sunday afternoons after church, I could always depend on the success of certain dishes: sweet and spicy apples baked with red hots, roasted chicken and delectable yeast rolls smothered in butter. At other dishes, I inevitably raised an eyebrow: Brunswick stew, lima beans and sweet potato pudding. After years of my mother disguising lima beans in succotash, I learned to appreciate them. Brunswick stew I dislike on principal. When I heard that my father would be making sweet potato pudding for Thanksgiving, my heart felt as heavy as a sack of potatoes.

My food-obsessed family always puts hours of thought into the array of dishes that will grace our table on Thanksgiving Day. Each integral component plays off the savory aromas and flavors of the next; vegetables do not haphazardly appear beside slabs of bland bird, but rather complement rich depths of game — duck, quail and goose have all made appearances. This year, I was envisioning a gratin of thinly-sliced sweet and Irish potatoes arranged in concentric circles and baked with cream and a hearty dusting of Parmesan cheese. Instead, I experienced unwanted flashbacks.

Grandmother frequently baked the bright sweet potato pudding in a celery-green casserole dish. The color clash alone constituted a red flag. I imagined the celery-green casserole dish as comparable to the color of the Vomit Comet, the pet name of the mustard-green car my Aunt had the fortune of driving in high school. In this vessel, the liquid separated from the solid mass of the pudding and formed a pool of off-color fluid at the bottom. Little hairy strings of sweet potato poked out of the malleable mixture after every removed spoonful. Once on a plate, the too-sweet-for-dinner dish always cooled within seconds. Each time sweet potato pudding appeared, I wished I could substitute an extra roll for my serving-spoon full, but I dutifully pushed some around on my plate.

Barring the rare slice of pie that appears on breakfast tables, pancakes are the delight of the morning: an occasional treat of a buttermilky pillow on lazy snowy mornings or birthday sleepovers when the house overfloweth with tousled-hair and pajama-clad girls. No one need ask twice whether or not I would welcome the opportunity for pancakes, for I do not discriminate among flat carbohydrates fried in liquid lipids.

In preparation for the redemption, we purchased some duck bacon from Timbercreek Market on a jaunt to Charlottesville. It’s the stuff of your best dreams. Pinky-length slices emerge from a skillet that has rendered them into smoky morsels the color of red wine. If a pancake transformation failed to improve the sweet potatoes, I would have rich depths of the essence of duck in which to wallow.

To my father’s credit, the sweet potato pudding he had made hadn’t separated as its forbearers had, but it nonetheless draped itself in that garish orange that reminded me of the Vomit Comet casserole dish. Ignoring all instincts indicating the futility of this idea, I placed my faith in a recipe courtesy of Southern Living’s “23 Ways with Sweet Potatoes” plus some extra cinnamon. A whisk and a hot skillet later, pumpkin-colored disks with butter-browned edges slid onto a plate.

Now, the ghosts of sweet potato pudding past have all but vanished, and the happy thought of sweet potato pudding in its present form of pancakes haunts the corners of my palate. No more chains made from sweet potato strings, no more viscous swamps at the bottom of ceramic baking dishes, no more ambiguous line between dessert and side dish. Only the soft taste of caramelized butter, the whisper of cinnamon, and a dreamsicle-colored bread adorned with pungent bourbon cranberries.

Thanksgiving leaves us with pleasant thoughts, and we open our hearts and our empty stomachs to the Christmas season.