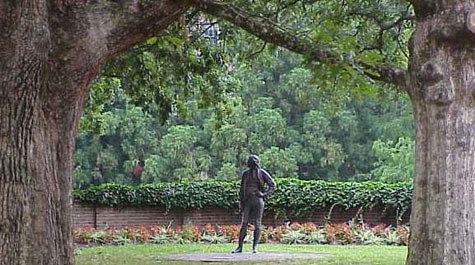 With headlines like, “Students Defile Thomas Jefferson’s Statue at William & Mary” and “College of William & Mary Students Want Statue of ‘Incestuous Rapist’ And ‘Racist’ Thomas Jefferson Removed,” one might think that campus was struck by a wave of protests similar to those that occurred at the University of Missouri and Columbia University.

What actually happened was the College of William and Mary’s Thomas Jefferson statue was discovered partially covered in sticky notes Nov. 9. The notes referred to Jefferson as a “rapist,” a “racist” and a “hypocrite,” among other things. They were removed within hours, possibly by other students. Although they were only up for a short amount of time, the notes managed to spark a conversation about Jefferson’s legacy at the College.

However, rather than simply erasing significant, controversial figures from view, we should use these statues to draw attention to their complicated nature.

In many ways, this incident exemplified campus discourse and debate at its best.

It is the opinion of this paper that the statue should remain on campus. Jefferson was a morally contradictory figure and the interpretation of his disturbing legacy with slavery should be emphasized more. However, rather than simply erasing significant, controversial figures from view, we should use these statues to draw attention to their complicated nature. The College community should also focus its energy on supporting organizations like the exemplary Lemon Project, which is currently striving to diversify the statuary on campus.

That being said, the posters raised valid concerns. It is not unreasonable to question blind admiration for Jefferson. The notes represented an act of free expression that was not destructive or uncontrolled. Also, whoever initiated the sticky note incident did not explicitly state a desire to see the statue removed from campus. No official protests were held, no petitions were written and no demands were issued to the administration. The posters never even identified themselves.

And yet some online news sources have exaggerated this event, implying it has gone to the same extremes as recent protests at Princeton University or the University of Missouri. According to a story on Breitbart.com, posted almost three weeks after the actual incident, the statue was still covered in sticky notes. The Irish Independent claimed that “historically illiterate” students at the College were demanding the removal of the statue. The level of media attention seemed to indicate more of desire to link back to trending topics like the protests at other universities rather than portray the situation in a nuanced, accurate manner.

It is heartening to see an open discussion of sensitive topics at the College.

The actual response from campus was, for the most part, restrained and respectful. While there was some backlash on social media platforms like Yik Yak criticizing the notes, the incident ultimately sparked a thoughtful discussion. Individuals had strong feelings about the sticky notes and Jefferson, but they mostly expressed those feelings through civil debate, not hysterical bickering. It is heartening to see an open discussion of sensitive topics at the College.

Off campus, there was a good deal of handwringing on Twitter, with individuals blasting the College as yet another bastion of political correctness full of historically ignorant students. Of course, these people are entitled to their opinions. However, the level of outcry over this incident seems overblown, if not a bit hypocritical. Whether or not you agree with the provocative sticky notes, this entire incident is ultimately about a group of students exercising their free speech. One would think a bunch of so-called Jeffersonians would support that.