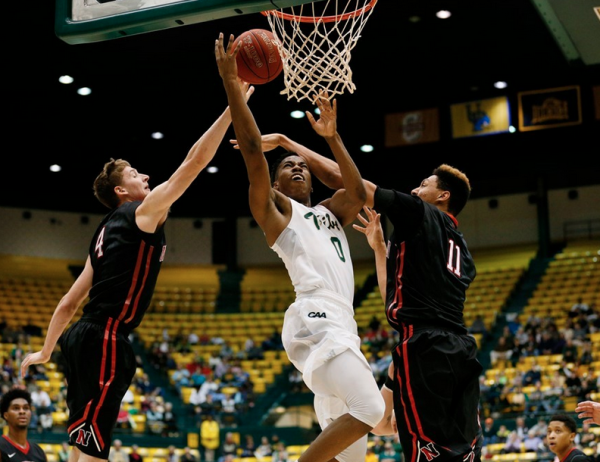 Although students are just getting back for another semester of classes, William and Mary has long been at work on the courts, playing a total of 17 games over the course of winter break. While readers can read each game story online at Flathatnews.com, we at the Sports Desk would like to give you a quick update on what to watch for as the College pushes through the conference schedule. Here are the quick hits from Tribe basketball.

Complete player: Junior guard Daniel Dixon certainly shone on the court last season, knocking down the game-winning three-pointer in the Colonial Athletic Association semifinal game last year against Hofstra in double overtime. However, this year, Dixon has shown his prowess from all over the court, emerging as a versatile offensive player for the Tribe. Dixon is second on the team with an average of 14.2 points per game, up from 11.1 last season.  Dixon has already surpassed his assist total from last year, notching 33 assists in 19 games after posting 32 assists in 2014-2015 season with 14 more games of action.

On the defensive side of the ball, Dixon has also shown significant improvement, notching the second-most blocks on the team with 15 this season, after only having nine last season. Dixon’s rebound average is up from 2.8 last year to 3.7 this season. Not all of Dixon’s improvements show up on the stat sheet, as he has been more aggressive and more successful driving the ball in the paint for points, showing he’s more than just a 3-point shooter.

Dixon has already surpassed his assist total from last year, notching 33 assists in 19 games after posting 32 assists in 2014-2015 season with 14 more games of action.

By the way, he can still shoot threes: Dixon leads the team with 50 triples in 19 games, shooting at 41 percent from beyond the arc.

Beneath that rough exterior: The Tribe is not what one would call a big team. Beyond the arc, the Tribe has the best three-point conversion rate in the CAA at 37.9 percent, and also leads the conference in field goal percentage at 48.5 percent. However, the hot-shooting Tribe suffers major deficiencies in physical, post-up basketball in the paint. The Tribe’s offensive rebounding ranks No.7 of the ten-team CAA, defensive rebounding is No.5. The Tribe defense relies upon the dynamic play of senior forward Terry Tarpey, who has a conference-leading 45 steals and 26 of the Tribe’s CAA-leading 96 blocks. Senior center Sean Sheldon far from dominates in the physical battles under the basket, as he. Sheldon’s 14 blocks aren’t bad, but sophomore center Jack Whitman already has 13 in limited minutes. Conventional wisdom suggests that Whitman is the better defender, while Sheldon is more of a shooting center. Neither matches up well against the likes of Hofstra’s Rokas Gustys, James Madison’s Yohanny Dalembert, or Drexel’s Rodney Williams. The Tribe often forces passes right under the basket, leading to the third-worst turnover margin in the CAA. For the Tribe to win games, they have to keep shooting from distance, because when push comes to shove, the Tribe isn’t going to win the battle in the paint against good teams.

Car sick: The College is a horrendous 4-6 on the road, including an ugly upset loss to Howard, which does not even hold a winning record. The N.C. State season-opening win was easily the best the Tribe has played on the road. Since then, the College trailed Liberty University at half before waking up, turned the ball and the game over to Virginia 67-52, nearly blew a 21-point lead to the College of Charleston in CAA win, forgot how to play defense against UNCW in a 97-94 loss, and finally was blown out by 28 by Hofstra this past Sunday. With the CAA crown still in reach, the Tribe has to come through on the road against CAA opponents like Delaware, Northeastern, and Towson in order to keep regular-season title hopes alive. At home, the Tribe is a stellar 9-1.

Double-double machine: Junior forward Alexandra Masaquel’s consistency has not gone unnoticed by head coach Ed Swanson, who referred to Masaquel as “a double-double machine” after she did not reach that particular statistic in the win over UNCW. Masaquel earned her first of the year Dec. 1, and proceeded to earn three more over the course of break. Masaquel is first on the team in rebounds (7.8 a game), fourth in steals with 27, third in assists, and second in blocked shots with 18. Her role on the team parallels that of Terry Tarpey for the men’s team, as both have emerged as team leaders on the court. Masaquel also has the highest shooting percentage on the team, knocking down 55 percent of her attempts.

Junior forward Alexandra Masaquel’s consistency has not gone unnoticed by head coach Ed Swanson, who referred to Masaquel as “a double-double machine”

Beginner’s luck : Freshman guard Bianca Boggs has transitioned into the starting lineup seamlessly, already the fourth-leading scorer with 7.2 points per game, and a team-high 39 steals this season. While Boggs struggles with foul trouble, leading the team in that category, her contributions to the team have eased the blow of losing Jazmin Boone ’15 to graduation. Boggs is the third-most efficient three-point shooter on the College’s roster.

Hot and cold: William and Mary tied the best start in program history at 8-1, and then finished the non-conference slate of games at an impressive 11-2. To put that in perspective, last season the College stood at 6-5 in the middle of a seven-game losing streak. The Tribe still slipped up in conference play after opening with two wins, one of those a huge overtime victory over James Madison in Williamsburg. The Tribe hadn’t beat JMU since the 2009-2010 season, breaking a 0-9 streak since then. Yet the College lost three straight in the CAA, and losses to Drexel and Hofstra were not pretty. Last week’s win over UNCW broke the slide, but it is anyone’s guess as to how far this young team goes, or how far they fall.