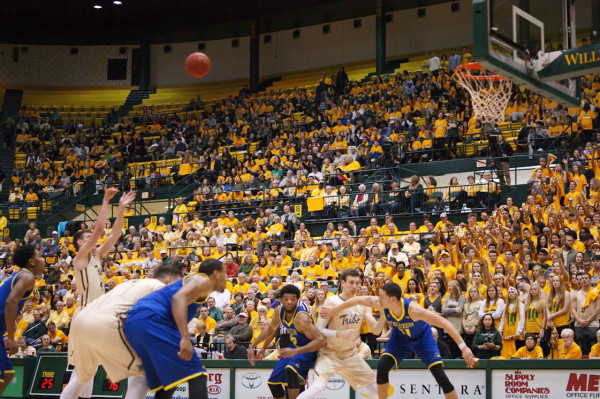 On the heels of a 83-56 thrashing at the hands of Elon, the Delaware Blue Hens, still crashing and burning in the 2015-2016 season amidst a 14 game losing slide, limped into Kaplan Arena in Williamsburg Feb. 6 to take on William and Mary (17-6, 9-3 Colonial Athletic Association), a team fresh off a comeback road victory in the conference and riding a four-game winning streak. The matchup played out exactly as one might expect. With the largest crowd of the season —6028 fans— at its back, the Tribe dominated Delaware (5-18, 0-12 CAA) in every aspect of the game to easily claim a 90-64 Gold Rush game victory for the College.

“Proud of the players, proud of the win. Anytime you win a conference game that decisively you feel good,” head coach Tony Shaver said. “Quite honestly, I’m really proud to be a small part of what’s going on right now.”

Shaver pointed to the largest home crowd of the season as a major benefit to the play on the court, though it certainly added to the pressure.

“It really is a sixth-man out there” Cohn said.”If a ref makes a bad call, the refs will hear it {from the fans} so we don’t have to say anything. That place is fun with that environment.”

“It’s been a great weekend for the College [and] a great celebration,” Shaver said. “Part of my nervousness tonight was that we had a lot of people behind us, and a lot of people working to make it good for us.”

Sophomore guard David Cohn echoed the sentiment. “I don’t think I’ve ever played in front of a crowd like that,” Cohn said. “It really is a sixth-man out there…if a ref makes a bad call, the refs will hear it {from the fans} so we don’t have to say anything. That place is fun with that environment.”

With a sea of gold t-shirted fans cheering them on, the Tribe picked apart the Blue Hen defense, mining the efforts of the bench players particularly well as the College received 33 points from the reserves. Delaware dug up just two points outside of their starting five. The domination began early, as the Tribe led the entire game except for the opening 39 seconds of a 0-0 score. As has become a trademark of the College, three-point shooting propelled the Tribe to an early 6-2 lead. With the best three-point percentage in the CAA at 39.2 percent, William and Mary dropped 13 triples on the Blue Hens at a 40.6 percent mark on Saturday. The Blue Hens failed to adjust to the College’s sharpshooting perimeter offense, as the Tribe repeatedly drove inside and then passed back out for the open triple.

“The last time we played them they played a straight zone, and that’s what we were expecting,” Cohn said. “Every time they went zone, it was just a high-ball screen and I’d attack downhill … my job tonight was finding the hot hand.”

There were quite a few hot-hands available on Saturday. Junior guard Omar Prewitt, the CAA Player of the Week, added 21 points on six of eight shooting from the field along with seven free-throws, marking the ninth time this season he has eclipsed 20 points. Sophomore guard Greg Malinowski tacked 15 to the board, a new career high, senior forward Terry Tarpey put up 12 and sophomore guard Connor Burchfield, the best three-point shooter in the nation with a 60.8 percent conversion rate, cashed in 11 points off the bench.

For the fifth time in the past seven games (nearly six games — William and Mary had 19 assists against Northeastern) the College racked up 20 or more assists on offense. Delaware surrendered 22 assists in a zone defense that was exploited time and time again by Cohn, operating as the Tribe’s point guard as he has all season.  Cohn finished the game with 10 assists.

Shaver found that particular statistic the most encouraging of the game, hinting that this year’s squad could have what it takes to win the CAA and finally make the NCAA Tournament.

“For us it’s so important to be unselfish, I’ve always believed in that style of play,” Shaver said. “It’s exciting to see a guy like David Cohn giving up opportunities to score to get the ball to other people. If you want to consider yourself a championship caliber team, [sharing the ball] has to be a part of that program.”

Saturday marks yet another loss for the Blue Hens. Delaware is now winless through the last 56 days, having lost to the Tribe ten days prior by a 94-79 mark in Dover. Saturday, the College dominated every section of the stat sheet: out-rebounding the Blue Hens by 15, shooting 53.2 percent compared to the Delaware’s 33.9 percent and blazing past the Blue Hens in transition for a 17-3 advantage in fast-break points.

Up next for the Tribe (No.2 in the CAA) is a key matchup against Hofstra in Kaplan Feb. 11. Hofstra is currently knotted up in a three-way tie for the No.3 spot in the CAA. Tipoff is set for 7 p.m.