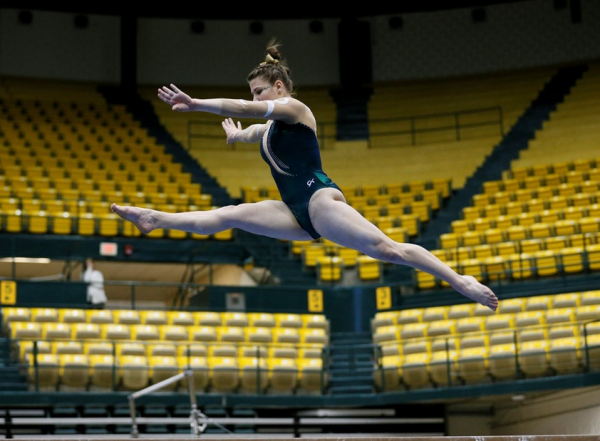 William and Mary took some big steps toward the postseason over the academic break, improving as a team and as individuals. The men earned a crucial win over Navy on March 5, while the women’s team split its spring break meets.

The men eked out a narrow 408.8-406.6 victory over the Midshipmen at Kaplan Arena in Williamsburg, Va., recording its highest total on the pommel horse event, earning 70.75 points. Sophomore Griffin Antle led the way for the College, notching a winning score of 14.5. Freshman Jacopo Gliozzi finished just behind Antle with 14.35, junior Rob Meyer and seniors Keaton Ackerman and Simon Casey notched 14.2, 13.9, and 13.4, respectively. Meyer took first place in the parallel bars event with a score of 14.55, and Casey finished second on the floor event with 14.1. Junior Jordan Palma also placed in the meet, grabbing third and 10th in school history with a score of 14.7 on the vault.

Meyer took first place in the parallel bars event with a score of 14.55, and Casey finished second on the floor event with 14.1.

The women edged North Carolina by a score of 192.450-192.225 on senior day at Kaplan Arena. The Tribe clinched victory by taking three of the top four spots in floor, with seniors Brittany Stover and Alyssa Glass as well as junior Olivia O’Connor taking the honors. Stover and O’Connor placed first and third respectively in pole vault with scores of 9.775 and 9.700. Freshman Madison Dwyer earned a place in the beam event, scoring 9.725 for a tie for third.

Stover and O’Connor placed first and third respectively in pole vault with scores of 9.775 and 9.700.

William and Mary did not have similar success against Towson, falling 194.635-194.075 in the meet despite recording the highest score of the season. Stover led the way again, finishing first in all-around and vault with scores of 39.15 and 9.85. Stover also placed second on bars and beam with scores of 9.775 in each. Juniors Bianca Gironda and O’Connor placed in two events each, with the former placing third in all-around and bars and the latter getting second and fourth in vault and beam.

The men will now prepare for their final meet of the regular season, facing Ohio State next Sunday, while the women look to the postseason, with the ECAC Championship Saturday.