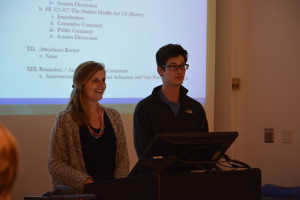 With buzzword issues like diversity, mental health and transparency floating around this Student Assembly election cycle, the three presidential contenders have crafted platforms that expand on their proposed initiatives. These same issues have surfaced in new legislation discussed in the SA senate, which is also preparing for elections March 24.

Sen. Quetzabel Benavides ’16 introduced the For the Green and Gold Resolution, a bill that SA President Yohance Whitaker ’16 also sponsored. This bill is the result of the presentation of the President’s Task Force on Race and Race Relations findings, and would promote the creation of a required set of courses in the College Curriculum to teach dialogue and engage in difficult topics if passed. Moreover, it would call for a memorial that would acknowledge the role enslaved Africans played at the College of William and Mary and would prioritize the hiring of diverse faculty members.

According to Whitaker, this bill expands on the preliminary presentation of the task force’s findings.

“This bill is primarily backing recommendations that come from the task force,” Whitaker said.

This bill is primarily backing recommendations that come from the task force,” Whitaker said.

Similarly, during Tuesday’s presidential debate, contender Eboni Brown ’17 proposed using SA to support administration’s prioritizing the hiring of a diverse faculty and staff. She also addressed expanding diversity education and awareness at the College through Orientation and Extended Orientation programming.

Class of 2019 President Jonah Yesowitz ’19 introduced the Code Beautification Act, which would amend SA code to reflect gender-neutral pronouns when referring to SA officers. Currently, the code sometimes uses just “his” when referring to officers and sometimes uses “his or her.” This act would change all pronoun use to “his or her,” in hopes of promoting gender equality.

“We have a fairly lengthy code that not all of us may have read fully,” Yesowitz said. “One weekend I read through it carefully and noticed discrepancies in wording. This is a super simple bill to make the language in the code all say ‘his or her.’”

We have a fairly lengthy code that not all of us may have read fully. One weekend I read through it carefully and noticed discrepancies in wording. This is a super simple bill to make the language in the code all say ‘his or her,’” Yesowitz said.

During the presidential debate, candidate Katherine Ambrose ’17 shared her plans to incorporate language that better reflects a diverse student body into the College’s mission statement, similar to the senate’s proposed code revision. According to Ambrose, this planned change to the mission statement would better reflect the history of the campus.

Another issue, while not discussed in great detail at the debate, that has been a large focus of the presidential campaign process is mental health. Each of the three presidential candidates has made mental health a central component of their published and revised platforms.

Class of 2018 president Laini Boyd ’18 introduced the Mental Health Awareness Act at last week’s senate meeting. Senators passed this bill tonight with a vote of unanimous consent. This legislation allocates funding to organize the Mental Health Week.  This week will include a white flag demonstration on the Sunken Gardens which represents the approximately 1,100 students who take their own lives each year. The week will also include a movie screening, a presentation from a community speaker and a K9 Connections visit with therapy dogs. This bill would allocate a total of $1,450 from SA reserves for these activities.

Undersecretary of Mental Health Delaney McAleer ’18, who gave a presentation to the senate at an earlier meeting, organized the week. McAleer also worked to make this event less costly than in previous years.