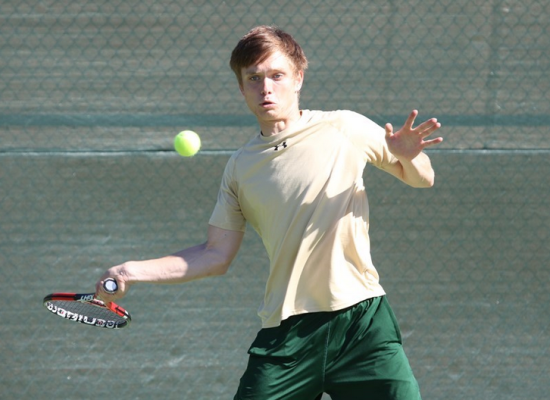 The 70th-ranked William and Mary men’s team continued its strong streak over the weekend, winning at home against Norfolk State Friday and Texas San Antonio Saturday. The No. 33 women also had a strong weekend, winning handily against East Carolina.

Against Norfolk State (2-12), the Tribe (11-3) dominated, winning all but two matches total, one singles and one doubles. At the No. 2 singles, junior Addison Appleby defeated Antonio Pejic 6-0, 6-2 in dominating fashion. Sophomore Alec Miller won 6-2, 6-2 against Dan Dumitrascu at No. 3 singles. At No. 4 singles, sophomore Lars de Boer defeated Fatehdeep Singh 6-4, 6-0. Junior Aidan Talcott was victorious at No. 5 singles, beating Flavian Fernandez 6-2, 6-1. On the doubles side, Appleby and sophomore Christian Cargill won 6-4 to secure the College win.

De Boer has been on a hot streak lately, winning eight of his last nine singles matches, and he is now 14-7 overall, 10-2 in dual matches.

On Saturday, a huge rally from de Boer and junior Damon Niquet in their doubles match sparked the Tribe to a 4-0 win over UTSA (2-13). At the No. 1 singles spot, Cargill made quick work of Diogo Casa, winning 6-0, 6-3. De Boer was fast to finish off Joao Riquelme 6-2, 6-2 at the No. 4 singles spot. Niquet also won in straight sets at No. 6 singles, winning 6-0, 6-3. The aforementioned comeback led to a 7-6 (4) win for de Boer and Niquet to seize the doubles point for the College. De Boer has been on a hot streak lately, winning eight of his last nine singles matches, and he is now 14-7 overall, 10-2 in dual matches.

The Tribe women (11-4, 1-0 Colonial Athletic Association) also had a strong showing over the weekend, as freshman Lauren Goodman, sophomore Maria Groener and junior Marie Faure all won in singles and doubles action to lead the Tribe effort over the Pirates (12-6, 0-1 American Conference). At No. 2 singles, Faure won a hard-fought match against Maria Storozheva 6-2, 3-6, 10-5. Goodman made quick work of Nicole LaDuca at No. 3 singles, winning 6-2, 6-2. Senior Julia Casselbury rallied her way to a tough three set win against Michelle Castro, 4-6, 7-6(2), 10-7. Groener won easily at No. 6 singles, 6-0, 6-2.

The College women were scheduled to face Marshall at home Sunday afternoon, but the match was cancelled due to widespread illness throughout the Tribe team.

The Tribe men return to action when they face eighth-ranked Texas Tech at the Rice Invitational in Houston, Texas March 26. The women travel to Yale to face both Yale and Rice March 25-26.