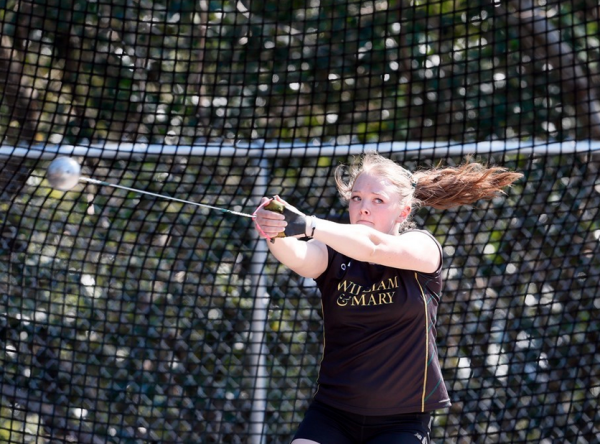 Both the men’s and women’s teams had a strong weekend competing at the Liberty Collegiate Invitational in Lynchburg, Va. and the Lou Onesty Invitational in Charlottesville, Va. despite heavy winds. The men and women each sent one athlete to Liberty while the rest of the team competed at U.Va. Over the weekend, the men had three Intercollegiate Association of Amateur Athletes of America meet qualifiers, while the women had three Eastern Collegiate Athletic Conference meet qualifiers and five all-time performances.

On the men’s side, redshirt-senior Brian Waterfield competed at Liberty and finished second in the hammer throw with a mark of 61.81 meters to qualify for the IC4A Championships.  After this performance, Waterfield now owns the six best all-time performances in school history, achieving them all within the past year. At U.Va. on Saturday, the Tribe took the top two spots in the javelin, as redshirt junior Bob Smutsky won with a throw of 65.46 meters and sophomore Derek Trott took second with a lifetime best of 64.26 meters.  Both have now qualified for the IC4A Championships.

After this performance, Waterfield now owns the six best all-time performances in school history, achieving them all within the past year.

Junior Troy Sevachko took fourth in the 400-meter dash, finishing with a lifetime best run of 49.67 seconds. In one of the most entertaining races of the day, senior Ryan Gousse won a sprint in the last lap to win the 1,500-meter run in 3:56.86 while freshman Riley Covert finished fifth with a time of 4:01.34. Sophomore Dawson Connell finished fourth in the 800 meter run with a time of 1:55.46.

On the women’s side, sophomore Leia Mistowski competed in the hammer throw at both Liberty and U.Va, giving impressive performances at both meets. At Liberty, Mistowski threw for 53.70 meters, her best performance of the season.  She placed second overall and qualified for the ECAC Championships.  In Charlottesville Saturday, Mistowski threw for 53.56 meters, which again qualified her for the ECACs. Her two marks over the weekend are the third and fourth best in school history.

Mistowski’s two marks over the weekend are the third and fourth best in school history.

Redshirt junior Rochelle Evans placed fifth in the hammer throw at U.Va. with a lifetime best of 47.58 meters, meaning she is also an ECAC qualifier. Sophomore Kathleen Wirshup finished third in the javelin at 33.38 meters, while classmate Jacqueline Meeks finished fourth in the pole vault at 3.35 meters.

Freshman Briana Miller turned in strong performances in both the long jump and the triple jump.  In the former, she jumped 5.46 meters. In the latter, she jumped for 11.07 meters. Senior Breanna Brukalo won the 400 meter hurdles in 1:05.11, while fellow senior Ashley Woodards finished fifth in 1:07.09.  Sophomore Kacey Wheeler finished fourth in the 400-meter dash at 58.62 seconds.

The Tribe looks to continue its streak of strong performances leading up to the IC4A and ECAC Championships when it competes in the New Captains Classic in Newport News, Va. on April 15-16.