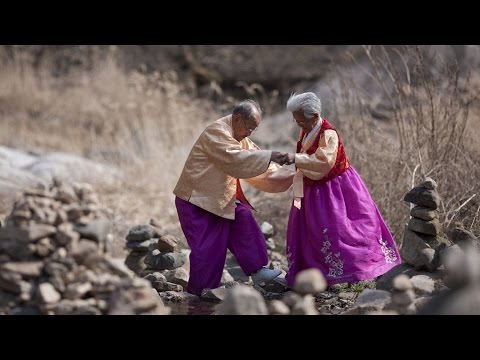 Hollywood’s attempts to depict romance often turn out melodramatic or sensationalized, always featuring two incredibly attractive individuals falling madly in love and living happily ever after. While Jin Mo-Young’s documentary “My Love, Don’t Cross That River” contains plenty of love and happiness, it also depicts decay, conflict and ultimately death. The result is a beautiful and real picture of marriage stripped of the typical cinematic frills that is just as heartwarming as it is heartbreaking.

The film follows the aging South Korean couple, Jo Byeong-man and Kang Kye-yeol,  over the period of about a year, documenting their everyday life as Jo’s health wanes. From the outset, the pair, who have been married for around 75 years, express an unlimited devotion for one another, enjoying each other’s company as only people truly in love can. However, tension begins to grow as Jo’s condition worsens, and Kang finds it harder and harder to communicate with her husband while she mentally prepares for the inevitable. As with all life, the film ends with Jo’s tragic passing and Kang calling out to her deceased husband to wait for her arrival in the afterlife.

The movie touches on several heavy themes, but at its core, “My Love, Don’t Cross That River” is a simple investigation into the true nature of love. Gorgeous Hollywood stars do not portray Jo and Kang; they are  real people in a real marriage with real problems. They are by no means wealthy, and never seem to have been, but that does not prevent them from experiencing joy and happiness together. Their relationship is based on selflessness, each sacrificing and striving to serve the other’s needs and desires. Jo and Kang do not soak up the screen with their external beauty. Their bodies show the cruel effects of time, but it is through the strength of their marital bond that the film takes its own strength.

That is not to say “My Love, Don’t Cross That River” is an easy watch. Mo-Young’s camera does not only record the couple’s happiest moments but also the ones defined by discontent. Jo and Kang’s story serves as a poignant counter to the rom-com notion of “happily ever after” by focusing on a relationship in its final stages. Jo and Kang frequently do not see eye-to-eye and struggle to understand each other on several occasions. The pair has experienced death and suffering long before Jo’s passing. Six of their twelve children died at a young age, and Kang struggles to watch her husband steadily move towards the same fate. Their extended family causes conflict and division as well; one heated exchange between two of their children brings Kang to tears during a family gathering. These moments of divisiveness feel necessarily uncomfortable to watch as a viewer, and the filmmakers deftly capture the ups and the downs present in any long-lasting marriage. By watching Jo and Kang’s love survive these difficulties, though, the story feels all the more rewarding.

Nonetheless, the one difficulty the couple of course cannot avoid or conquer is Jo’s death, which, like the rest of the film, is handled with total authenticity. His suffering lasts throughout almost the entire run-time, old age slowly but surely taking its toll on his frail figure. Kang takes on the role of narrator as the film moves forward, guiding Mo-Young and his crew (and tangentially, the viewer) through her emotional responses to Jo’s failing condition as she prepares for the moment of unbridled grief that is surely to come. The filmmakers do not force Kang to record her thoughts as a talking head, but rather let her words and actions speak for themselves. Allowing her to take the reins in this way makes “My Love, Don’t Cross That River”’s final moments all the more gut-wrenching: Kang kneeling by her husband’s grave and weeping becomes a perfect snapshot of uncensored sorrow and undying love. It’s humanity at its most vulnerable, and Mo-Young’s cinematography is nothing short of exquisite.

“My Love, Don’t Cross That River” offers a sobering portrait of true romance; its honesty is the film’s strongest trait. Its authentic depiction of two individuals experiencing the real joys and pains of love and death is refreshing in an era of movie-making defined by the fantastical and sensational. Sometimes we need reminders of the realities of life and love, and Mo-Young’s film certainly hits the mark.