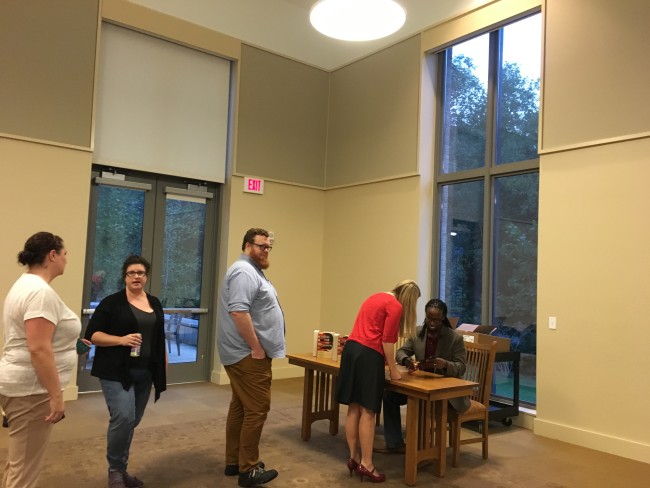 African-American historian and award-winning author Ibram X. Kendi gave a presentation on his new book, Stamped from the Beginning: The Definitive History of Racist Ideas in America, Wednesday, Oct. 6 in the Matoaka Woods Room at the College of William and Mary School of Education. In his speech, he shared his perspective on history and the present significance of racist ideas.

Kendi is an assistant professor of contemporary African American History at the University of Florida, where he specializes in racist and antiracist ideas and movements. His new book, released on April 12, focuses on five main characters in different time periods throughout American history to trace the development, dissemination and enshrinement of racist ideas in America.

Kendi said he hoped to simplify the complexities of race to make racist ideas more understandable and accessible.

Based on this definition, Kendi made a distinction between producers and consumers of racist ideas. Challenging the common understanding of the development of racist ideas, Kendi said that it was not the case that ignorant people had created racist ideas, leading to the creation of racist policies. Instead, he determined that racist policies, driven by various self-interests, made people create racist ideas to rationalize their policies, engendering “mass ignorance.”

“The policies, those we know or we don’t know, are actually creating these disparities,” Kendi said. “The most effective way [to fix this] is to change and challenge the policies.”

He suggested that as far as producers, people should pay attention to the policies rather than continuing to blame black people. According to Kendi, it is important to challenge the producers’ ideas about racism because for consumers. He said that even if they’ve changed their minds, the racist ideas are still being produced and could still affect those consumers.

Education Professor Eddie Cole, the organizer of the event, said that it is important to have people like Kendi to address the viewpoints on racist ideas on campus.

With the current issues of race on college campuses, such as the ones being addressed by the President’s Task Force on Race and Race Relations at the College, Cole said that bringing in experts on racism in America is important to give historical context.

Hopefully, Professor Kendi can have the audiences first critically evaluate themselves when it comes to the understanding of their own viewpoints on race,” Cole said.

“Hopefully, Professor Kendi can have the audiences first critically evaluate themselves when it comes to the understanding of their own viewpoints on race,” Cole said. “When we really think critically about how we enter our roles into the assumption we made about race, that’s the first step in truly challenging racism. My hope is for a talk like this to change the entire campus climate on how we make decisions involving racism on campus.”

The event attracted faculty, students and community members. Some attendees said that Kendi’s presentation had brought about an interesting discussion and many refreshing points about racist ideas which gave them a lot of inspirations.

Kinesiology and health sciences professor Ashleigh Queen said she was excited to hear about the history of racism.

“My background is the natural sciences,” Queen said. “Hearing what is used to be thought genetic to what we know now [about racism] is a really interesting comparison from my background and my perspectives.”

As a prospective social studies teacher, Bill Stark E.d. ’17 said that the speech was important in that it lent new perspectives on systemic problems of social injustice.

“I think the speech is a really powerful example of how the deep systems, policies, ideas influence [our lives],” Stark said. “I’m trying to become a social studies teacher. I think it is important to get people to not just look at the situations around them to say, ‘This is social injustice,’ and, ‘This is bad.’ There are also [deeper] causes that create that social injustice.”