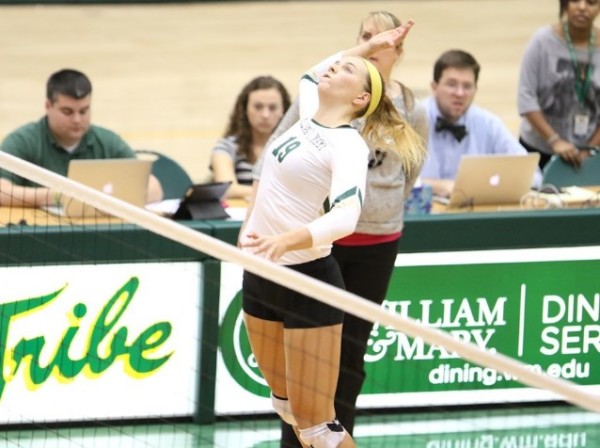 Cheers erupted from the court and the stands as William and Mary secured its first win in the Colonial Athletic Association after defeating College of Charleston Friday night. The Cougars entered Kaplan Arena unbeaten in conference play.

The Tribe (8-11, 2-4 CAA) left it all on the court on Friday night against the Cougars (11-6, 4-1 CAA), winning the match 3-1 without going into a fifth set. The Tribe won the first set 25-20, which saw two crucial point-scoring blocks by sophomore middle-hitter Katie Primatic and junior outside-hitter Sydney Biniak to retain the lead. The Cougars stole the second set 25-19 to even the match. Tied 1-1, the Tribe left the court for intermission knowing it needed a strong comeback in the third set.

“We took some time to reflect,” freshman setter Autumn Brenner said. “I think we were overthinking some things and we needed to stay disciplined in some of the small stuff. Once we got that down, we were in a rhythm and we were unstoppable.”

The Tribe came out fighting for each point against the relentless Cougars, winning a nerve-wracking third set and an even more nail-biting fourth set both 25-23. Senior back-row defender Gabrielle Pe served nine straight points in the fourth set, followed by the match point kill by freshman outside-hitter Casey Foote off a set from Brenner, asserting the Tribe’s first CAA win.

“It’s not like I was really pushing the serve, but everyone was fighting together to push the points and keep me serving,” Pe said.

Biniak and Foote led in kills with 16 and 15, respectively, while junior libero Sara Zumbach led the defense with 24 digs. Brenner executed 40 assists, nearly the number of combined assists of both College of Charleston  setters Elizabeth Hurring and Allison Beckman.

“So many players had an opportunity where the going got tough with them and they could’ve folded, and they didn’t. They were just resilient,” Ferris said. “They persevered and I’m so proud of them.”

In its second match at home after 12 matches away, the Tribe came out on top once again on Sunday afternoon against reigning CAA champion North Carolina-Wilmington (12-6, 2-4 CAA). Foote again led the offense with 14 kills, followed by junior middle-hitter Paige Humphrey with 12. Brenner topped her 40 assists in the previous match with 41 against the Seahawks. Pe and Zumbach led the defense again with 23 and 27 respective digs, closely trailed by freshman defender Samantha Conway with 22 digs.

The Tribe looks to extend its winning streak this weekend with a Friday tilt at Delaware before a match at Towson Sunday.