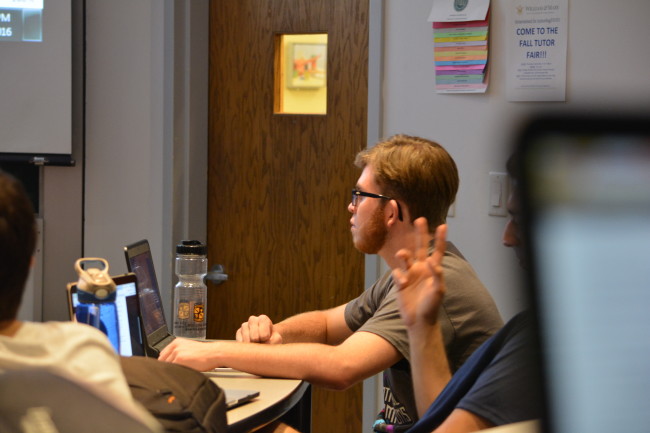 During Tuesday night’s Student Assembly meeting, senators introduced and voted on two bills that aim to make the College of William and Mary a better place. Summing up the night was Chairman of the Senate Danny O’Dea ’18, who asked members of SA to do their best to be kind to others, particularly in the wake of the death of Austin Zheng ’18.

I hope everyone did have a good homecoming weekend, but I know that we lost a member of the community,” O’Dea said. “Just as a little task, if we could all tell somebody that you haven’t told recently that you care about them, that would be really good.”

“I hope everyone did have a good homecoming weekend, but I know that we lost a member of the community,” O’Dea said. “Just as a little task, if we could all tell somebody that you haven’t told recently that you care about them, that would be really good.”

In an effort to reach out to transfer, non-traditional, exchange and St. Andrew’s University students, Sen. Sikander Zakriya ’19 introduced the Transfer Student Act. This act would allocate $200 for an event aimed to promote inclusion and help these non-traditional students learn about SA.

“For transfer students, this would be a good thing since they are so spread out, it’s a good way for them to get to know each other,” Zakriya said. “It would allow SA members to connect with them and explain what SA is about. It would give them an opportunity to bond with each other.”

Next week, the bill will be discussed in old business and voted on. If passed, funding for the event would sponsor a night at Brickhouse Tavern on Oct. 29.

Last year, Class of 2018 President Laini Boyd ’18 sponsored a similar bill that specifically targeted transfer students from the spring semester who did not have the same opportunities as fall semester transfers to connect.

In terms of improving the physical appearance of the College, the senate passed the Crim Dell Restoration Completion Act by a vote of unanimous consent. This bill was co-sponsored by Sen. Brendan Boylan ’19 and Class of 2019 President Jonah Yesowitz ’19.

“I think this is a fantastic bill,” O’Dea said. “It’s a really good thing we can do to help out the campus physically a little bit. As a school we have been talking about how to improve one of our most iconic spots on campus. The last few years, pollution has just taken its toll.”

This bill allocates $300 from SA reserve funds to purchase gold azaleas from a local market to plant around the Crim Dell. The bill also stipulates that the SA Undersecretary of Sustainability Stuart Jones ’18 is responsible for purchasing the azaleas. All unused money will be returned to the SA reserves.

According to Jones, when he talked to the SA Student Life senate committee, he emphasized that this bill had the potential of having long-lasting effects on the campus.

Something we really thought was that this is something that could grow when we left,” Jones said.

“Something we really thought was that this is something that could grow when we left,” Jones said.

Also at the meeting, SA President Eboni Brown ’17 updated the senate that the Print Shop at the Earl Gregg Swem Library had negotiated the price-per blue book down to $0.36, from the $0.50 they were originally charging at the beginning of the semester. This price increase led to last-minute funding from the SA senate last spring before final exams.