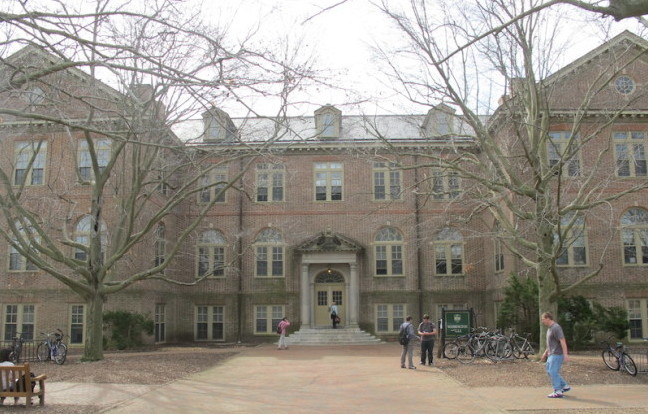 Government professors at the College of William and Mary held a lecture on Thursday, Nov. 17, with one goal in mind: try and explain what happened with this year’s presidential election.

The lecture took place in Washington Hall and had a panel of nine professors. Each spoke for a short time about their own specialties in relation to the election, from United States welfare policy to the possibility of tax cuts by Congress.

Government professor Jaime Settle started the lecture by discussing new research that suggests a lack of a correlation between the education level of white males and their decision on whether to vote for President-elect Donald Trump.

“Initial raw data shows that there seems to be a relation between the education and willingness to vote of a white male,” Settle said. “However, when you control for views on immigration, the relation goes away. We start to see less correlation, in terms of education.”

Government professor Larry Evans spoke about the major legislative changes he expects to see in Congress and also said that he believes congressional Republicans will not pass every idea Trump supports.

“We’re going to see a major tax cut and a functional gutting of Obamacare by Congress,” Evans said. “But Republicans in the house are traditionalists, patriots. They love their country and want to get re-elected, they’re not crazy.”

After the panel finished speaking, government professor Paul Manna, the host of the lecture, opened the floor to questions from the audience.

One audience member asked how one could explain Trump’s relative success with minority voters in contrast to Mitt Romney, the Republican nominee for president in 2012. Settle said that she was not sure if Trump truly had a better turnout.

“Exit polls do not give great, quantifiable indicators, and political scientists are still going through large amounts of data,” Settle said. “There is currently much better evidence saying the contrary of those exit polls.”

A second member from the audience asked whether the political beliefs of professors on the panel could have altered the quality of their research and been the cause for polls saying former Secretary of State Hillary Clinton would beat Trump in the election. Settle said she does not believe so.

“I do not believe academia is the problem here,” Settle said. “Our personal political beliefs have us ask certain questions maybe, but they don’t change the way we do our research. We will arrive at the same conclusions either way.”

Another audience member asked if members on the panel believed that Senator Bernie Sanders would have won the election as the Democratic nominee. Government professor Lenneal Henderson said that he could not say for sure whether Sanders would have beaten Trump.

“Bernie and Hillary were very different,” Henderson said. “I think [Trump’s victory] was more antipathy with the status quo. Both are from different wings of the Democratic party. I don’t know if Bernie would beat Trump.”

A last audience member asked how important this election was for millennials and members of Generation Z. Government professor John McGlennon said that he believes the current generation of young Americans will form political views based off this election for their entire lives.

“I do think this generation will stay more Democratic,” McGlennon said. “Baby boomers are more Republican because of Reagan, and their parents were more Democratic because of the New Deal. We have seen that important elections affect people for years, decades to come.”

Evans weighed in and said that he believes young voters should not feel discouraged about this election. He said that change and progress will come as their generation grows older and becomes a larger voting bloc.

McGlennon joked and remind the audience that political views can change throughout people’s lives.