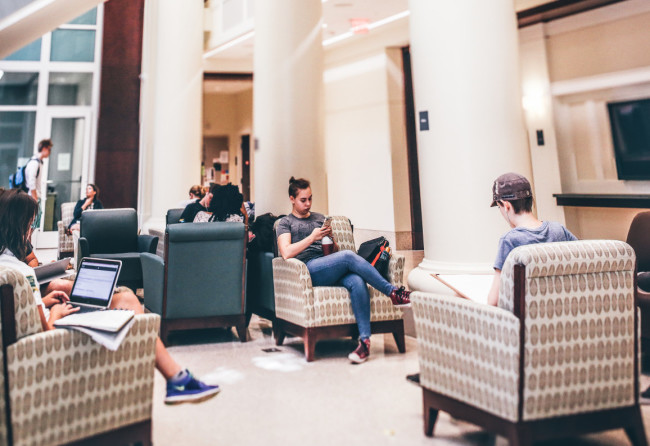 Government professors at the College of William and Mary held an informal discussion on Monday, Nov. 28 about the intersection of gender and politics. This was the first talk in a series of events that will be held at the College in order to discuss this topic.

The discussion was held in Tyler Hall and featured professors Jaime Settle, Ron Rappaport and facilitator Claire McKinney. Students also contributed to the conversation by asking the professors questions and engaging in a dialogue with them about gender in politics and the 2016 election.

Beginning the roundtable-style discussion, Settle discussed how women fare in American politics. She said that while women win elections at the same rate as men, not nearly as many women run for office as men do.

“Part of the issue is this broken pipeline we have about getting women into politics in the first place,” Settle said. “Women see themselves as less likely to run for office, less likely to win when they run. So there is a perception issue that begins very early on.”

Rappaport discussed his studies on American adolescents and differences between gender at a young age. He said that women were much less likely to express political opinions than men, but when they did they were mostly correct. He said this reticence to take a chance was related to lower levels of political efficacy among women. However, when both genders are forced to guess on political questions, this changed.

“If you force women to guess and force men to guess, that gap in knowledge reduces a whole lot,” Rappaport said.

Rappaport then switched gears to relate the question of how gender affects politics in the wake of the 2016 election and specifically why many women had voted for President-elect Donald Trump. He said that gender, religion and socioeconomic class become more important issues when their prominence is raised, as exemplified by Catholics turning out at a much greater rate to vote for former President John Kennedy.

He also explained that this question of shared fate as a deciding factor when voting might have aligned women more with their class identities than their gender identities because of the prevalence of class as an issue during this election.

“I think the shared fate these women felt made them feel more aligned with these uneducated, white non-elitists than with women,” Rappaport said.

One participant in the discussion asked if the election would have had different results if former Secretary of State Hillary Clinton had been male. Settle said she wasn’t sure, and that specific demographics would have to be considered, but that Trump would definitely have treated a male general election opponent differently.

“You would have to look at who would have brought on board for the Democrats and who would have fallen off that coalition,” Settle said. “The key that you would want to look at is the people in the Rust Belt; would they have been more likely to vote for a white male?”

A second participant asked a question about Trump’s version of masculinity and whether that is the new normal. She asked if this hyper-masculinity is what voters are now looking for and if this will change politicians’ personality in the future. Rappaport said to look to debates in the midterm elections to answer that question, and that a desire for his hyper-masculinity might have been influenced by voters’ fear in the current political climate.

Another participant asked why millennials voted drastically differently than older generations and what this means for the future. Settle said that there certainly is a gap in votes for the Republican Party, but that because millennials typically do not vote at high rates, their opinions are not given as much weight as those of older generations are.

“As long as groups don’t vote, they really are not heard,” Settle said.

Assistant Director in the Office of Community Engagement Elizabeth Miller ’11 said after the talk that she thought it had been productive and that it is important to consider gender when discussing politics. She also said that it was not surprising that the election was discussed to a great extent, even though that was not the planned topic of the discussion.

“I wasn’t too surprised by what was discussed,” Miller said. “I think it’s really important to consider gender; I’m a GSWS alumna of the College and so I think gender is really salient in our lives.”

Allison Cohen ’17, a participant in the discussion and a global governance and community engagement major said she was interested in researching the subject of gender and politics further, particularly in regard to the election.

Commenting on the fact that there was only one male student present at the discussion, she said that it was disappointing but not surprising that male students do not show as much interest in gender issues as women do. Cohen said she would be coming to events similar to this one in the future and was pleased with the productive discussion that occurred.

“Gender isn’t just a women’s issues, it relates to everyone,” Cohen said.