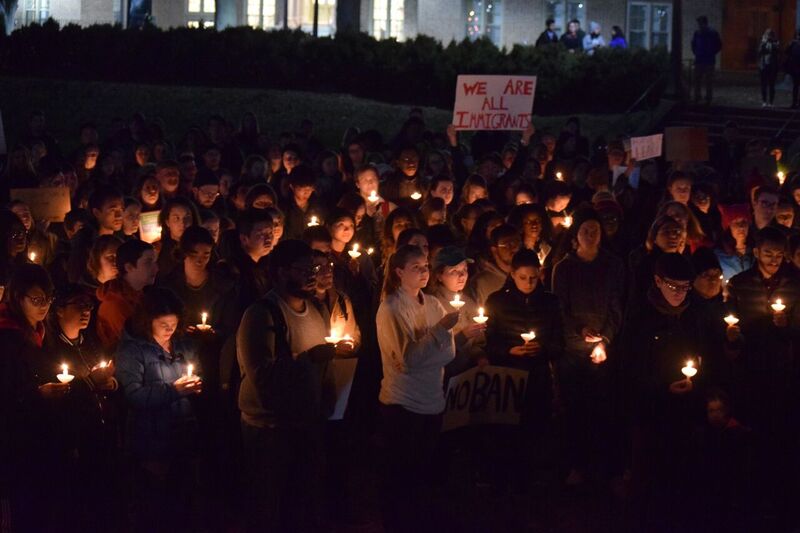 Trump’s Muslim ban — and yes, despite the framing efforts of some conservatives, it is a Muslim ban — is a mockery of justice and due process. It clearly violates Articles 2, 6, 8, 9, 12, 13, 14 and 28 of the Universal Declaration of Human Rights, not to mention the 14th Amendment to the Constitution. If that wasn’t bad enough, members of our community have been victimized by the ban, trapped in their country of schooling or barred from it.

Supporters of the ban have claimed that it is not a prejudiced or unjust order primarily through the following arguments: that Obama did the same thing, which makes it okay, that it does not target Muslims, since the world’s largest Muslim nations are not on the list and that it is justified due to safety concerns. The first argument is flawed in the first place since Obama is by no means the gold human rights standard — scores of civilian drone casualties beg to differ. That said, it’s also just wrong. Obama created new standards for refugee resettlement in response to a security threat from one country. He did not target multiple countries, did not revoke existing visas, did not target green card holders and did not arbitrarily attempt his standard shift without a specific incident to provoke said changes. The second argument ignores the fact that the order specifically includes a religious exception for Christians, effectively imposing a religious test that is meant to exclude Muslims specifically. The third argument falls flat since the United States already has the most robust refugee vetting system in the world. Refugees in America have a lower crime rate as a group than the national average, and no refugee has ever committed a terrorist attack on American soil. Ironically, if your aim is to cause harm, being a refugee is just about the worst way to enter the country. The vetting process is more robust compared to other visa types, and refugees are heavily monitored by the FBI and local resettlement agencies.

It is our duty as a community to stand up, for and with them, and to show them that we love and support them in the face of this persecution.

Support of this ban is not policy; it is prejudice. And it is prejudice that members of the College of William and Mary have personally been hurt by. Whether it’s emotional pain from being rejected by their government, societal pressure from unwelcoming elements of the community, or physical detention and visa revocation, the Muslim and Middle Eastern members of our community are feeling the pain. It is our duty as a community to stand up, for and with them, and to show them that we love and support them in the face of this persecution. I hope that the vigil Thursday helped in that regard, and I give my deepest thanks to Abdelrahman Aboulatta for organizing it with me.

Our community often parrots the phrase “One Tribe One Family.” Now is the time to prove it. Members of our community are directly targeted by the ban and to support it is to cast them aside. A student named Abbas spoke at the vigil Thursday and told the assembled crowd that he can no longer go home. He is part of my family, but if you abandon him in his time of need, then you are not part of ours.