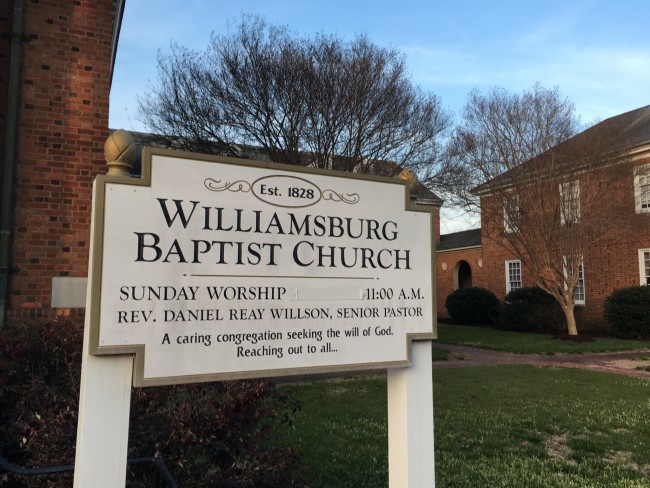 A talk called “Listening to your transgender neighbor” was cosponsored by the Williamsburg Baptist Church, Equality Virginia and the Wesley Foundation at the College of William and Mary on Friday, March 24. It was part of a conscious effort by the church to become more supportive of the local LGBTQ community.

This goal of this talk was to engage the religious community in a dialogue about the transgender experience and assist them in learning about the problems transgender people face.

“I’m thankful for times like this where we can just sit and listen and share in someone’s story,” Willson said. “I’m a big believer in changing one’s mind. I grew up in a Christian context where I used to believe that it was a sin for women to wear pants.”

The keynote speaker, Tracey Swinarski, followed Wilson’s introduction and spoke about her life as a transgender woman. Swinarski said that, while she did not seek to speak for everyone in the transgender community, she hoped her experience could help people learn more about the issues people in that community face.

“I am a claims adjuster for a major insurance company, I’m a musician, I’m a cyclist, I’m a Christian and I’m even a veteran of the United States Army,” Swinarski said. “I’m a 56-year-old transgender woman who transitioned at 43 years old.”

Growing up as one of five children in a small, northern-New Jersey town, Swinarski said that many of her early memories involve feeling a discrepancy between her assigned gender and her true identity.

“I was about two or three years old — it was the only thing in life I wanted to be,” Swinarski said. “I prayed, I did everything, I don’t know why I wasn’t born a girl, it’s all I dreamed for and all I wished for. I knew something was wrong deep inside me. I didn’t feel like I belonged in my body.”

Swinarski described other episodes in her childhood that were influential — she described how heartbreaking it was to tell her seventh grade girlfriend about feeling out of place in her body, only for her girlfriend never to speak to Swinarski again.

She recalls hating wearing “boys’ clothes” and wanting to wear dresses instead.

“It just felt like that cold winter night where you take out your favorite sweater and put it on you and how that feels so nice and warm — it’s kind of that same feeling for me also,” Swinarski said, describing how it felt to try on her sister’s clothes as a child.

Swinarski joined the Army as a musician, and was stationed in West Berlin with the Berlin Brigade band when the Berlin Wall came down, which she credits as accelerating her coming out process.

I thought, ‘I need to feel this liberation for myself, I can’t be in this prison anymore,’” Swinarski said.

“I thought, ‘I need to feel this liberation for myself, I can’t be in this prison anymore,’” Swinarski said.

After returning to the United States from Berlin, Swinarski and her wife had a daughter, but she said she still did not feel at ease. Swinarski transitioned in 2004, at the age of 43.

“Every second of everyday of my life until I transitioned, that was completely on my mind,” Swinarski said. “Something’s not right, I need to be a girl. My body isn’t right.”

While Swinarski said she is happy to have transitioned, she recognized that the process has not been without its challenges. After coming out, her wife asked for a divorce and a court ruled that Swinarski would not be able to see her daughter anymore. She said her immediate family also was not initially supportive.

Two of the students in attendance, Hannah Mawyer ’17 and Sam Biddle ’18, who are both members of the Canterbury Association, the Episcopal organization at the College, said they found Swinarski’s story powerful.

Mawyer said that as someone from a conservative small town, it is valuable to be equipped with firsthand stories, rather than newspaper articles or statistics, when discussing issues of social justice.

“It’s a lot easier to be compelling when presented with combative neighbors at home, to present experiences and real life to them rather than trying to make it seem like I’m smacking them with a book,” Mawyer said.

Biddle also saw this event as a unique opportunity to engage in open dialogue, especially for Williamsburg community members.

Our campus is a really special place — a lot of people are only going to have this opportunity then they’re going back to work life and workplaces which don’t permit the type of conversation that we have on campus,” Biddle said.

“Our campus is a really special place — a lot of people are only going to have this opportunity then they’re going back to work life and workplaces which don’t permit the type of conversation that we have on campus,” Biddle said.

Swinarski said that the main issues affecting the transgender community today involve employment discrimination and the disproportionately high levels of violence targeted at them.

Six months into working at a private music store after transitioning, Swinarski said she was fired after two families complained to the store owners. While Swinarski has consistently been able to find jobs, she said that is not always the case for people in the transgender community.

“I’ve been fortunate — I’ve been completely employed the whole time since I’ve transitioned,” Swinarski said. “A lot of my [transgender] sisters and brothers don’t have jobs — they get fired because of who they are.”

In Virginia, there are no laws preventing private employer discrimination against people based on sexuality or gender identity. Equality Virginia’s Trans* Advocacy Speakers Bureau aims to use personal narrative’s like Swinarski’s to raise awareness of the most pressing issues facing the transgender community.