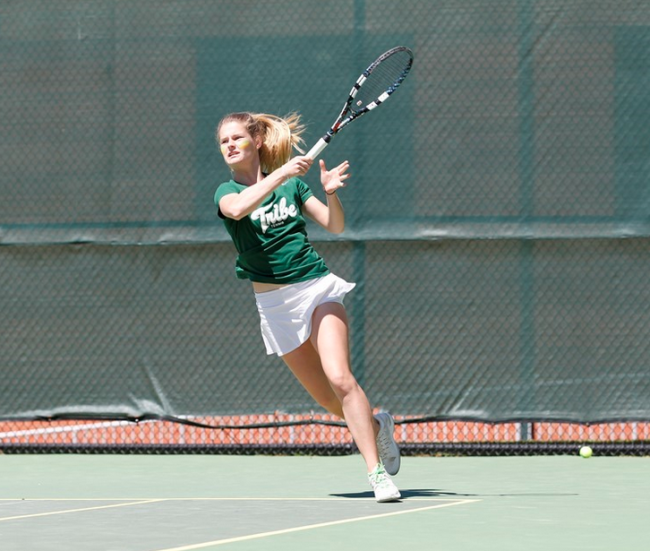 The William and Mary women kicked off the Colonial Athletic Association Championship with a quarterfinal victory over Drexel Friday. Saturday, the Tribe downed James Madison in a semifinal matchup. Sunday, the College overpowered UNC-Wilmington and was named CAA Champion for the third year in a row.

Cheng started the College’s singles win streak with a triumph at the No. 4 spot over Drexel’s Lea Winkler 6-4, 6-0. This marked Cheng’s 11th win in the past 12 matches. Junior Ekaterina Stepanova followed suit with a 6-1, 6-4 victory at the No. 1 spot over Honami Yazawa, her 50th career win. After a hard-fought first set, Goodman ended the quarterfinals with a 7-5, 6-0 win at the No. 5 spot over Dragon opponent Clary Rodriguez Cruz. The matches at the No. 2, 3 and 6 spots went unfinished as the Tribe advanced with a 4-0 conquest of the Dragons.

Saturday, the Tribe faced off against JMU. The Dukes led the College 1-0 after they secured the doubles point. At the No. 2 spot, Dukes Dylan Owens and Jona Roka defeated duo Perry and Wuenscher 6-1. The Tribe retaliated with a 6-2 win by Faure and Goodman at the No. 1 spot, pushing the duo to 11-5 at the top doubles position. Duo Cheng and Stepanova fell to opponents Emma Petersen and Rebecca Harris 6-4 at the No. 3 spot, surrendering the doubles point to JMU.

Despite the early lead, the Dukes ultimately fell with the doubles point as their only success. Faure started the Tribe comeback with a victory at the No. 2 spot over Peterson, winning both sets 6-1. Stepanova came back from her doubles loss with the 6-4, 6-1 defeat of the Dukes’ Timea Guibe, putting the College up 2-1. Stepanova’s victory advanced her season record to 16-12 overall and 11-8 at the No. 1 spot. Goodman defeated Owens 6-4 both sets at the No. 5 spot. Cheng ended the semifinal battle with a victory over JMU foe Kimmy Herrock in an intense 6-0, 7-6 (9) contest.

Matches at the No. 3 and 6 spots went unfinished as the Tribe advanced to the CAA Championship with the 4-1 triumph over JMU.

Sunday, the College took on UNC-Wilmington in the CAA Championship. The Seahawks got an early 1-0 jump on the Tribe, winning the doubles point with victories at the No. 1 and 2 spots. Stepanova and Cheng defeated Xandra Fougner and Celeste Matute 6-1 at the No. 3 spot before the Seahawks stole the point.

The College, similar to the semifinals, came back in singles play. Goodman kicked off the comeback with a 6-0, 6-1 win over Sabrina Barisano at the No. 5 spot. At the No. 3 spot, Perry dominated UNC-Wilmington’s Alix Theodossiou, 6-1 both sets. Cheng defeated Xandra Fougner 6-1, 6-3 at the No. 3 spot, putting the Tribe up 3-1. Stepanova fell in close contest to Seahawk Madara Straume 6-3, 7-5 at the No. 1 spot. Faure closed out CAA play with a third-set victory over Annika Sillanpaa 2-6, 7-5, 6-3, securing a 4-2 win over the Seahawks and the College’s CAA Championship victory.

The Tribe will advance to the National Collegiate Athletic Association Tournament, its 18th appearance in the past 22 years and the fourth in five years under head coach Tyler Thomson. The NCAA Regional Championship is set for May 12-14.