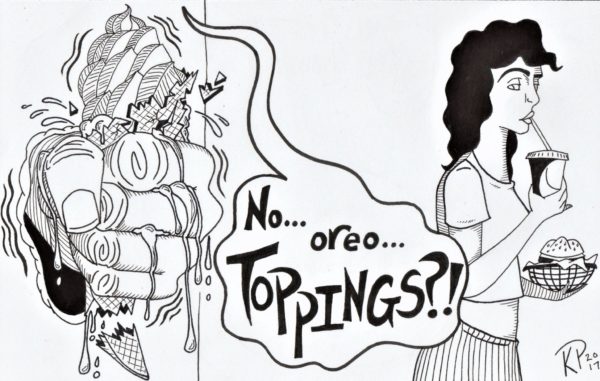 Students at the College of William and Mary need reliable dining options available in order to fill the void that the closure of Dining Dollar-friendly restaurants, like Pita Pit and The Crust, have left. In the face of this void, those who have purchased traditional meal plans with the College need to be able to turn to their dining halls for consistent service. Severe changes to Sadler, however, have made the choice to rely on the College’s dining halls undesirable.

As a student who transferred from another institution with not nearly as high of an endowment per student, I can affirm that the College’s food options are unacceptably underwhelming, with the dining halls of Sadler and the Caf offering the most disappointment for hungry students. While the Caf has changed little, apart from the meager addition of Buddha Bowls, Sadler has changed dramatically as the new academic year begins, and not for the better.

The first change I noticed on Sadler’s opening day was the rearrangement of food sections, the most notable of these being the vegan station’s swap with the former salad station and the allergen-free station’s move to the former vegan station. These changes, while confusing at first to Sadler veterans, seem mildly acceptable. Isolating the allergen-free station is a sensible move.

What is absolutely not a sensible move is replacing ice cream toppings with sandwich toppings. If Sadler wants to be a real college dining hall, and one that is taken seriously, those in charge of Sadler need to understand how to organize food. The move implies that people do have a mild desire to put cheese, tomato and lettuce on their ice cream, and yet I do not know a single person who puts sandwich toppings on their ice cream. I do know many people, however, who have a strong desire to put actual ice cream toppings, like crushed Oreos and sprinkles, on their ice cream.

As a student who transferred from another institution with not nearly as high of an endowment per student, I can affirm that the College’s food options are unacceptably underwhelming.

If Sadler’s ice cream toppings do indeed exist, great. But their existence is meaningless to me if I cannot find them due to poor organization. If the ice cream toppings do not exist, then Sadler should redeem itself by bringing back them back with the list I shared above in mind (while also being considerate of allergens when possible).

Another issue I have with Sadler’s reorganization is finding a salad bar where the dessert station used to be. Instead of being by the dish return, the dessert station is now between the pizza and sandwich stations. If I was in a rush to get to class last year, I would grab a cookie from the dessert station, drop my plates and silverware off at the dish return and leave. It made sense to place all desserts by the dish return and the exit for students to do just what I did. While I confess that I do not eat salad too often (especially here because the lettuce is usually wilted) and that I am a little miffed at seeing my grab-and-go plans for dessert foiled, I can set aside my personal feelings and still say that the swap between the two stations makes no sense.

For as long as I have been a student at the College, I have relied on the Mongolian Grill, sometimes twice a day, as a constant source of carbohydrates and vegetables. As someone who was also encouraged by my cardiologist to maintain a diet that is high in sodium, the Mongolian Grill was a perfect option for me, given that it provided a high-sodium sauce like teriyaki. When I walked in to find that the vegetable station of the grill was covered by a block of wood and a serving stone, I was crushed.

Now the Mongolian Grill is gone, and there’s no food left at the College that I enjoy. But I’m not surprised — the food here was never good to begin with, and I knew that counting on the College to maintain the one good section out of all the dining halls was too risky and would only lead to disappointment. Consider me disappointed and saddened by the dramatic changes to Sadler.