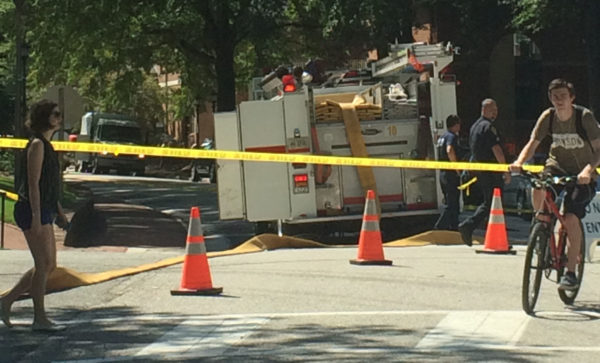 In the month of September, students received that fateful combination of a text, phone call and email from the College of William and Mary’s emergency notification system several times. Tuesday, Sept. 5 there was a diesel spill near Swem, and it still smells faintly of gasoline when you pass by the area. The next day, a regularly scheduled test of the system went out. This past Wednesday, Sept. 20, there was an “incident near Adair Hall” in the morning that was later revealed to be a gas leak. Although it was cleaned up by the afternoon, that evening another alert went out as students evacuated the Sadler Center due to a kitchen fire.

These events were not just Snapchat-story fodder — they were actual emergencies that the campus needed to be notified of. For that, I commend the protocols in place for fulfilling their purpose and notifying the campus of dangers and incidents as they occur.

However, I don’t know that notifying the campus of “incidents” is the best way to go about things. For all the good our notification system has done, it has also caused some trouble lately. For instance, with the gas leak at Adair, it was first reported as an “incident,” which is a vague term that can mean just about anything. While this vagueness is not technically wrong, specificity is always beneficial when it comes to anything that involves student safety.

I was in a dance class in Adair when the gas leak happened, and we evacuated the building after someone came to tell our professor that there was a gas leak. The stairwells smelled like gas as my class was evacuating. Because I was there, I knew exactly what was going on. However, because it was not reported as a gas leak until several minutes after it was called an “incident,” I had several friends tell me they were confused or panicked about the nature of the incident. Since “incident” can mean anything from a tree falling on the building to a medical emergency to a gas leak, it is understandable that students would be concerned about the lack of information provided.

Even so, the half-hour lag between the texts I received that referred to the situation as an “incident” and as a “gas leak” is not the most concerning issue our campus has seen with the emergency notification system in the past year.

In July, the system sent out a message that said “Gun shots reported near(loc). Police are responding. Remain securely indoors. Call 911 for help or to report additional information.” A few minutes later, another message went out that said “False Alarm. There is no emergency on campus. An alert message was accidentally sent.”

This error was absolutely unacceptable, and although it was not as devastating an issue as it would have been during the school year when everyone is on campus, it was still a mistake that affected a great number of students at the College for the summer. A mistake like this should not have been possible. There should have been enough safeguards in place that an alert about a serious incident could not be sent accidentally.

An active shooter situation is not something that anyone takes lightly, and the people in charge of sending out emergency alerts should treat “incidents” like shootings and gas leaks with the same respect and concern the student body and College community does.