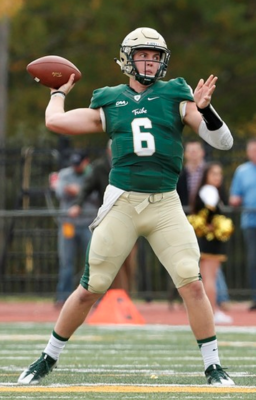 The pre-game notes for William and Mary’s Saturday afternoon conference clash with no. 19/21 New Hampshire describe the Tribe as “one of the league’s top pass-defensive teams.” After giving up over 500 yards to the Wildcats’ pass-heavy offense in a 35-16 loss, the Tribe’s sixth-straight Colonial Athletic Association defeat, suffice it to say the College defense did not play up to its reputation.

Let’s run through the numbers, shall we? New Hampshire quarterback Trevor Knight torched the Tribe secondary to the tune of 406 passing yards, completing 25 of 35 pass attempts, including four touchdown tosses. The Wildcats as a team totaled 511 yards of offense, scoring on all four of their trips to the red zone and showing an impressive knack for converting on third downs, going 8 for 13 in that department. In the immortal words of Pete Campbell from AMC’s “Mad Men,” the College defense Saturday was “not great, Bob!”

It was a cruel, ironic twist of fate for the Tribe, as the College offense finally posed a consistent threat to an opposing defense Saturday. Junior quarterback Tommy McKee, restored to the starting role he lost earlier this season, looked like a quarterback reborn. He was composed in the pocket, stepping into throws with a confidence rarely seen in his previous appearances under center for the Tribe. He set a new career high in passing yards with 272 on 28 of 44 passing, while also leading the College in rushing yards with 79 and scoring both of the Tribe’s touchdowns with his feet.

“He got the ball launched, that’s been the concern we’ve had with Tommy,” Laycock said. “He’ll go back there and he’ll start looking at the rush as opposed to looking down the field. And that’s something they’ve been working on him and working on him, and he did a better job getting it launched. And receivers got open, made some catches … we just got to keep building on that.”

Of course, McKee’s adjustments, while encouraging, did not necessarily pay huge dividends against the Wildcats. Points remain elusive for the Tribe offense, which still has yet to hit the 20-point plateau in a CAA game this season. The College drove into the New Hampshire red zone three times in the first half, all three resulting in just 10 total points. If the Tribe had been able to replicate the success of the Wildcats in the red zone, the game would have had a far different outcome. Unfortunately for the Zable Stadium crowd, it was not to be.

That being said, the game also could have had a different outcome if the defense had played up to the standard it set in previous weeks. The Tribe came into Saturday fourth in the conference in total defense, consistently keeping the College within striking distance in most contests, even if the offense failed to put enough points on the scoreboard. However, Knight and the New Hampshire offense made it abundantly clear that the Tribe’s shortcomings this season cannot all be blamed on the struggles of the offense. Laycock has repeatedly said the defense does not create enough turnovers — the College is dead last in the CAA in that category — and Saturday the Tribe suffered the consequences. Knight was repeatedly able to avoid pressure and extend plays, particularly on third downs, buying his receivers enough time to find the holes in the secondary and move the chains.

“It was very different from how we’ve been playing up to this point,” Laycock said after the game. “We’ve been playing really good defense up to this point, and for one reason or another we were not able to react, especially to their passing game. Whereas on the other side, I thought offensively, other than some deals in the red zone where we didn’t finish a few drives, I thought we did a pretty good job … There were some good things to come out of it, but obviously not enough.”

That final phrase, “not enough,” is a perfect encapsulation of the 2017 Tribe football season. In every game, even the lopsided losses such as the one Saturday and the homecoming defeat against James Madison, the College has had chances to rise to another level and compete with the best the CAA has to offer. However, whether it be an offense unable to score points or a defense unable to prevent them, the Tribe continues to come up short. It’s disappointing to see from a program with the reputation of the College, led by a coach with a track record such as Laycock’s. While hopes of a playoff spot have long since vanished, the Tribe still has two games left to show it can do “enough” to have success in the CAA and build some confidence heading into the offseason and 2018.