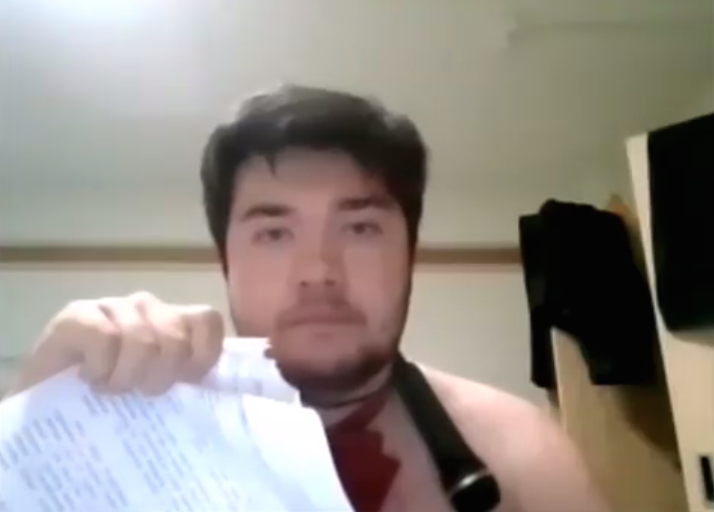 Sept. 27, I departed a club meeting early with the goal of attending the now-infamous AMP-sponsored talk that was to be given by the director of the Virginia Chapter of the American Civil Liberties Union. As has been recounted countless times since then by many sources, a Black Lives Matter-based coalition of students successfully managed to shut the talk down via protest. Nearly half a month later, our College’s president, Taylor Reveley III, released an email that in the eyes of many directly threatened those who had protested and actively utilized current school policies to stifle further political activism. Oct. 21, I switched on a camera, threw on a bow tie, and ate that email to the sounds of “Unknown Pleasures.”

Personal political leanings are often difficult to articulate, especially when one falls outside of reified party lines. My video fell under some scrutiny, as my actions at the actual event and on my Facebook page “Discourse” demonstrated a clear ideological opposition to the protest. However, I think this cuts to what I hope to accomplish with this piece. I have my own political reasons as to why I disagree with the BLM group on this issue while still being angered by the potential for the group to face administrative repercussions, but what matters here is the decision to state such beliefs and express them.

I am not a great activist, and I don’t think people really should have to be. In writing this, I hope not to convince people to care about the First Amendment or rape culture’s linkage to fraternities, but rather to implore all who are reading to care about something. William and Mary is a school built upon a varied populace, and its students were brought to this campus not because of any one political ideology, but because they inform the polity with a unique perspective driven by their passion. If you care about animal rights, keep on caring. If you care about systemic, racialized violence at the hands of the police, keep on caring.

Continuing this line of reasoning, I don’t consider one’s “caring” to then immediately necessitate a specific kind of action. Picketing and chants may not be for everyone, and the idea that one is obligated to do so helps no one, drawing away from the love of a cause that so many of us feel. This love should not shoehorn one into action to which one is resistant. Rather, it should motivate acts that one enjoys doing. Make a sign if you want, eat an email if you want. The incorporation of one’s own brand of advocacy will uphold the tenet of diversity that defines this school far more than merging into a crowd. Working toward positive change and having fun should not be divorced, but should instead be the very basis of political activism.

With that in mind, avoid eating paper on an empty stomach and drink plenty of water throughout.