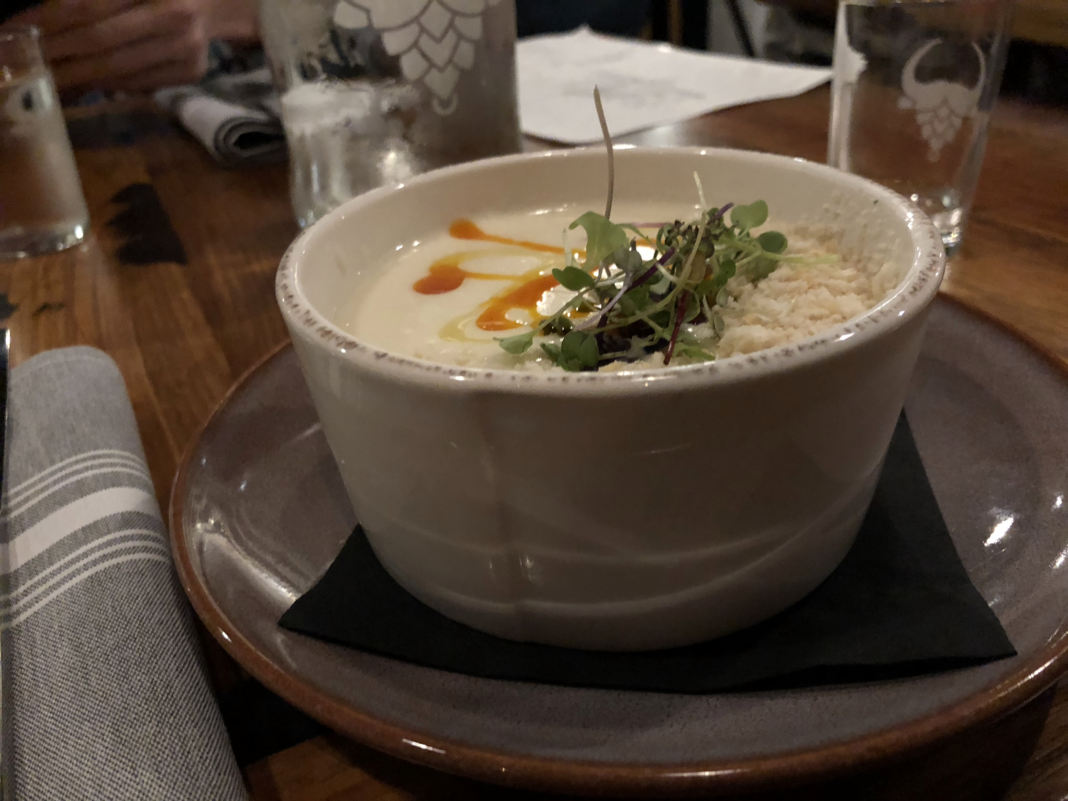 When Maddie and I first walked into Amber Ox Public House, I was struck by the cheerful yet noisy ambiance of the restaurant. The place was stuffed to capacity, as one would expect on a Saturday night. A giant mural of an ox stared down at us as we sat at our table.

The beer menu has over 18 colorfully named options on it, most of them brewed in-house. Options range from a #Publyfe pale ale, deemed “liquid nostalgia in a glass” by the menu, to a Butcher’s Mouth imperial stout that includes smoked malts, bacon powder and molasses.

I chose a Munich Dunkle called Tracing Lines, a beer with heavy malt flavoring and pleasant tastes of bread and citrus. With just a touch of bitterness, this beer had a light feel to it and was easy to drink.

For my entree, I chose the sweet tea-brined pork chop. For $16, I received a large pork chop over grits and collard greens. It had bourbon-apple and pot liquor sauces drizzled on top of it. The pork chop was juicy and flavorful, and it went really well with the consistency of the grits and gr

eens. The sauces added an extra burst of flavor. The serving was large enough that I, a person who usually has no trouble finishing off meals, was not able to totally clean my plate. This was a heavy meal, as were most of the other options on the menu.

The service was generally good, and the music added a fun vibe to our dining experience (think “Mr. Brightside” by The Killers). The two largest drawbacks were the volume of the dining room and the prices. I often had a hard time hearing my fellow Flat Hatter as we were discussing our meals, and I ended up paying approximately $26 for

a small beer and an entree. Granted, I received a lot of good food, and the restaurant is located close to Merchants Square, where high prices are the norm. But for a college stude

nt such as myself, a trip to Amber Ox must be a rare treat, or else my bank account will quickly go dry.

Despite these drawbacks, I’d still recommend Amber Ox to anyone looking for a large, creative beer selection with hardy food. Just be ready to open your purse strings.

that thrives on classics, like buttermilk drop biscuits and shrimp and grits, and its drinkmenu that invites one to relax, and rest easy.

The brewpub’s seating capacity is massive. These seating arrangements, however, prioritize quantity over comfort and were situated in rather close-quarters: Sean and I were at a two-seater and were almost on top of our neighbors at a two-seater and four-seater, respectively. Such arrangements also contributed to the noise level, which I found overbearing during conversation.

Aside from the abysmal seating arrangement, we experienced excellent service, and the staff often checked on us, as well as other guests, with a frequency that was not intrusive.

The menu featured appetizers, sharing plates and entrees, as well as side dishes like ox collard greens and pimento mac and cheese. Aside from items like a public house poutine with pimento cheese scallion pesto as an appetizer, the menu painted a cohesive picture of southern fare, with some contemporary twists.

I first started my food journey with a White Russian — a cocktail that incorporates vodka, Kahlua and cream or milk. My White Russian was elevated with some vanilla flavoring, either in the form of a vanilla vodka or a drop of extract, and went down rather smoothly — perhaps, too smoothly because the subtleness of the Kahlua. (I prefer my coffee liquor drinks on the stronger side in terms of coffee liquor-to-vodka ratio.) The cocktail ran about $9, and to give you an idea of the competition, the Green Leafe Cafe prices them for $8, and, from the ones I’ve tasted at the Leafe, I’d argue those better suit my coffee liquor needs.

Initially, I was caught between the $11 poutine sharing plate and the $6 potato and cauliflower soup. I am a die-hard pesto fan and my curiosity to try pesto with the poutine dish almost tempted me to do so, but in my mind, the extra $5 was not worth it.

I chose the potato and cauliflower soup and was served a considerable portion. The soup was a light consistency accented by sharp and sweet taste of cauliflower, while the taste of potato made up the undertone of the dish. A garnish topped the soup alongside a few drops of annatto seed oil. Other than its saltiness, the soup was perfect.

For $18, I had the classic shrimp and cheese grits, with pieces of tasso ham in a pool of beer vinegar sauce. Though intriguing, the tasso ham was disappointing; it was underseasoned and texturally off. The five shrimp on my plate appeared underwhelming, but tasted fine. They, like, the ham, could have benefited from more seasoning, but less so. The creamy grits were the star of the dish; they were dense and complex in texture, and soaked up the beer vinegar sauce well, the latter of which had a kick. Unfortunately, the large amount of garnish detracted from my grits experience. While the taste of the garnish was a great complement to the dish, I found the stems disruptive, if not jarring, to the already dense texture of the cheese grits.

I ended the night having spent roughly $44 on my full meal after taxes — $24 on food, $9 for the drink and $7 for the tip. The food was great, but for the price, it was underwhelming when compared to restaurants that operate on similar price points, like Food for Thought, located on Richmond Road. For drinks, I’d rather ponder the intricacies of the White Russian elsewhere, and my sentiments are the same for the food.