For the first time in many years, one student, Sen. Brendan Boylan ’19, is running unopposed to be Student Assembly president. Next Thursday, March 22, the College of William and Mary will elect new representatives to SA. Campaigns for senate, class president and student body president and vice president officially began March 12.

“I wanted to run for SA president after serving in the senate and realizing that there is so much untapped potential with Student Assembly that with the right leadership and a good team, we can unleash that potential,” Boylan said in a written statement.

“I wanted to run for SA president after serving in the senate and realizing that there is so much untapped potential with Student Assembly that with the right leadership and a good team, we can unleash that potential,” Boylan said in a written statement. “It also ties into my belief that there are a lot of issues facing our campus, chief among them being the stress culture and the mental wellness aspect that SA should be involved in alleviating by working more closely with administrators and the like.”

Boylan chose Samir Tawalare ’19 to be his running mate, and the two have identified engaging with incoming College President Katherine Rowe as one of their primary goals, since they will be the first SA administration to establish a relationship with her office.

“And in spite of a myriad of problems and criticisms of our community, we should also appreciate the incredible work of our peers and how unique this place is, and then when we build a community of respect and compassion as Samir and I are setting out to do, we can accomplish a great deal of reform both internally in SA, and culturally throughout the entirety of campus,” Boylan said.

Boylan has served as a senator for the Class of 2019 for the last three sessions and has also served as the chair of the senate’s policy committee and as the senate historian.

Unlike last spring’s elections, when each class president ran unopposed, the race for each class president position this year is contested. Current Class of 2019 President Jonah Yesowitz ’19 will not be running for re-election. Sen. Sikander Zakriya ’19 and Zauhirah Tipu ’19 are now campaigning for the position Yesowitz has held for three years. Class of 2020 President Kelsey Vita ’20, who ran for re-election unopposed last year, is now campaigning against Abe Winterscheidt ’20, who has not previously served in SA. In his first bid for re-election, Class of 2021 President David DeMarco ’21 faces competition from an SA insider, Sen. Aria Austin ’21.

While some incumbent senators are not running for re-election, there are enough newcomers in the race to ensure that all positions are contested this year.

“I’m running for a senate seat on 2019’s delegation simply because I’m not graduating this year,” Bowden said in a written statement.

“When I transferred to the College almost two years ago, I was assigned 2018 because of my accepted transfer credits. … Despite my non-traditional student experience, I’m confident I would represent the senior class of 2019 on their senate delegation just as well as I have with the senior class I’ve been representing this year.”

For the class of 2020, Sen. Abhi Chadha ’20, Sen. Clare DaBaldo ’20, Sen. Sarah MacPhee ’20 and Sen. Ellie Thomas ’20 are campaigning for re-election once again. Ryan Walter ’20, who challenged Chadha in a special election in the fall 2017 semester, is also running again.

The race for the class of 2021 senate is the most contested, with 10 candidates running for four spots. Sen. Helen Tariku ’21, Sen. Kyle Vasquez ’21 and Sen. Jack Simmons ’21 are all running for re-election in their senate spots. They are joined by newcomers Keyyatta Bonds ’21, Abby Fergus ’21, Benjamin Hotchner ’21, Anthony Joseph ’21, Margaret Lister ’21, Patrick Salsburg ’21 and Ben Wagner ’21.

Candidates will continue to campaign until next Thursday, and many have already published platforms on social media pages and campaign websites. Elections will occur via an electronic ballot that will be emailed to students the day of the election. 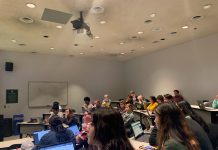