In the eighth annual gathering for The Lemon Project: A Journey of Reconciliation, poet Nikki Giovanni drew the largest gathering the symposium has seen since it first began.

The Lemon Project, the initiative focused on studying the history of African Americans at the College of William and Mary, hosted a symposium March 16-17 that featured a series of speakers, artists and panels. This year’s symposium also coincided with the commemoration of 50 years of African-American students in residence at the College and focused thematically on the historical context of desegregation in higher education.

When College President Taylor Reveley delivered remarks on the second day of the symposium, he spoke about the evolution the Lemon Project has seen from its inception.

Few schools, Reveley said, have had projects of racial remembrance and repentance as lengthy, as multifaceted and as community-centric as The Lemon Project.

“Slavery and segregation characterized William and Mary far longer and for far more generations than diversity and inclusivity have characterized us over the last few decades,” Reveley said “I genuinely feel we are making an effort to understand our past and to learn from it and to move forward effectively as well and The Lemon Project has been a crucial, and indeed, the crucial piece, to this endeavor.”

“When we think about the dirge and the second line, it’s not about death — it’s about moving towards a place of life,” Prince said.

After Hurricane Katrina hit New Orleans in 2005, Prince was moved to create the work “Katrina’s Dirge,” suggesting hurricane Katrina cleansed the nation’s misleading perception of New Orleans and unveiled the city’s underlying racial tensions and injustices. In another of his pieces, “Nine Little Indians,” Prince illustrated members of the Little Rock Nine who were the first African-American students to enter the all-white Central High School in Little Rock, Arkansas Sept. 1957 despite violent protests after the U.S. Supreme Court struck down segregation.

In the afternoon, artist Steve Prince led a hands-on communal artwork workshop to create a piece called “The Lemon Revival,” using woodcuts and commemorating the contributions of Lemon to the Williamsburg community.

Christine Fulgham ’17, who participated in the class Prince led over the summer during which the collaborative “Lemonade” mural was created, found Prince’s talk valuable in its message to find the beauty in life alongside mourning. This is something she said she sees reflected not only in Prince’s work, but in the Lemon Project’s broader mission.

“I’ve been thinking a lot more about ancestry and about how people paved the way for you to be able to do things,” Fulgham said. “Someone paved, through their body, their labor, their time, their love and their energy for you to have the things you have now.”

To Fulgham, recognizing Lemon, an enslaved man owned by the College, is a way to recognize history more fully.

Following Prince’s Friday talk, a roundtable on the College and the local African-American community focused on the relationship between the university and the town and included four Williamsburg residents. Later Friday, Provost Michael Halleran gave a few remarks before a discussion on Giovanni in context. Friday night ended with a conceptual performance piece from Valarie Gray Holmes titled “The New Gatekeepers,” which imagined a woman who was around in 1959 to witness the integration of the College.

Before Giovanni stepped up to the microphone for her address, the Leah Glenn Dance Theatre performed a piece entitled, “Stifled, Sorrowed … Sustained.” The three dancers, Olivia Armstrong ’14, Kayla Moore ’13 and Arisa Smith ’17, danced to music by Philip Glass and audio recordings of Giovanni poems.

Giovanni’s speech took a poetic approach to talking about the history of African Americans, from the horrors of the transatlantic slave trade to more contemporary forms of racism and discrimination such as police brutality.

Giovanni spoke about the resilience of the African-American community and its myriad of contributions to American society and culture. Her speech emphasized that acknowledging history through initiatives like The Lemon Project is important in order to move forward.

One student in attendance, Neonna Ferebee ’20, said she considered Giovanni’s remarks a highlight of the symposium.

“She really affirmed black womanhood and our ability to sustain throughout history,” Ferebee said.

Furthermore, Ferebee stressed the importance of The Lemon Project at the College.

“I’m glad we have something like this where we can recognize our history, especially this institution and its connection to slavery,” Ferebee said. “I’m excited for the future.” 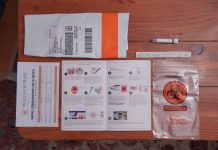