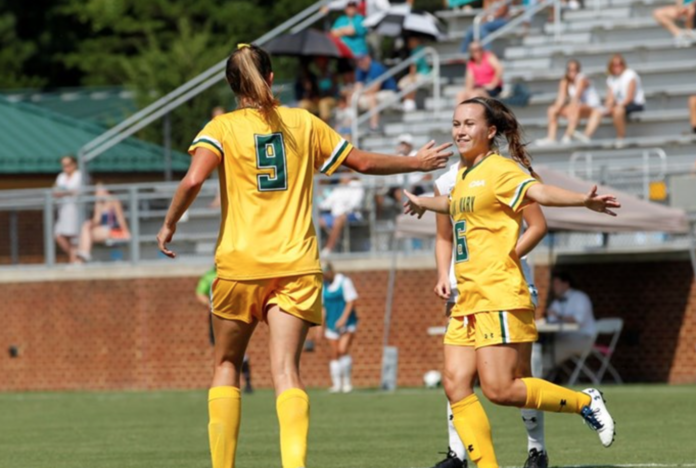 Eight minutes into the second half, the scoresheet was still blank. Redshirt junior forward Sarah Segan stood at the line and studied the goaltender, waiting on the whistle for her penalty kick.

She placed the kick into the right corner of the goal, giving William and Mary the spark it needed as the Tribe (1-3) downed Coastal Carolina (1-2-1) at home for its first victory of the season, 2-0.

The College dominated possession in the opening half, putting up seven shots to the Chanticleers’ two, but the visitors made four saves in those first 45 minutes to keep the score tied at 0. When the second half began, the Tribe continued to drive possession, finally breaking through with Segan’s penalty kick.

“Segan is our go-to player,” head coach Julie Shackford ’88 said. “When you watch, it’s pretty clear to see that she is extremely dangerous anywhere in and around the box. We have high expectations for her.”

When the Tribe next got on the board seven minutes later, it was Segan again, this time on a breakaway pass from sophomore midfielder Erin Dailey.

“It was a great through-ball in right away,” Segan said. “… It was perfectly timed, and then I was able to get a couple touches and pass it to the far post.”

The goal pushed the score to 2-0 for the home team, and despite a few last pushes from the College — including a shot by Segan that went just wide, denying her the hat trick — that would stand as the final score. With this, the Tribe picked up its first victory of the 2018 season, having fallen in matches at Maryland and Dayton, then dropping its home opener to Virginia Thursday.

“I knew it was gonna be a tough turnaround, having played UVA, who’s really a top three team,” Shackford said. “So I knew there would be a little bit of fatigue, but I think we stayed patient. I don’t think it was the prettiest game at times, but we did enough to get dangerous and got some really good opportunities, especially in the second half.”

The 3-0 loss to Virginia earlier this week offered a learning opportunity for a team that is still growing after a wave of offseason turnover in which the team lost eight seniors.

“After every game, we’ve learned and gotten better and better,” Segan said. “So, this game, it was nice to actually get the outcome we wanted. So that’s good for our confidence going forward, and we’ve been getting better every game, like making sure we keep the ball. And this game we definitely out-possessed the other team.”