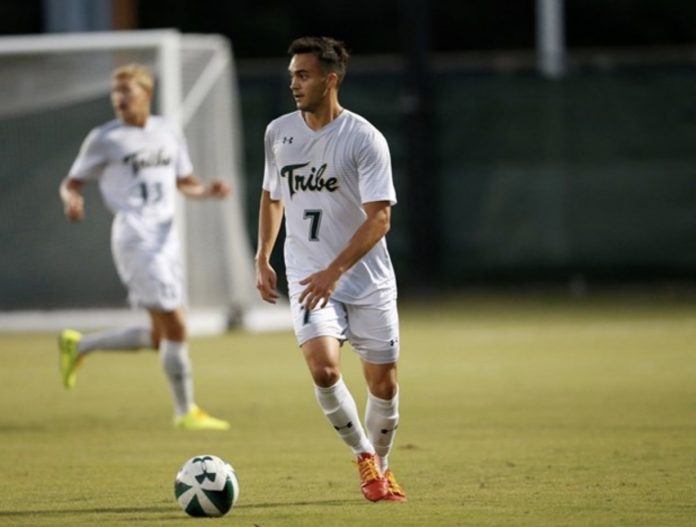 After sneaking into the six-team Colonial Athletic Association tournament, fifth-seeded William and Mary, without senior forward Antonio Bustamante, upset No. 4-seed Delaware to advance to the semifinal. After falling behind to the Blue Hens (5-11-1, 4-3-1 CAA) early in the match, the Tribe (6-9-2, 3-3-2 CAA) stormed back with three straight goals, including two by junior forward Reeves Trott, to take control. The College held on to claim a 3-2 victory.

The Tribe defense stepped up early in the first half, as Delaware pressed but was unable to get on the board. Redshirt senior goalkeeper Sam Onyeador made a stop in the 14th minute after a Blue Hens corner kick, keeping the game scoreless.

That would not be the case for long. In the 17th minute, midfielder Nathan Edmunds found himself alone inside the six and made no mistake, putting Delaware on the board first.

It would take just two minutes for the Tribe to get right back into the game. Junior midfielder Julian Ngoh scored his third goal of the year off an assist from redshirt senior midfielder Graham Guidry to tie the game at one.

Play was muddied for the next ten minutes, until Delaware won another corner kick. This time, Onyeador made two back-to-back saves to preserve the tie. Feeding off the momentum, the Tribe scored just seconds later in the 30th minute. Senior forward Ryder Bell found Trott inside the box and, from the left side, Trott put it past the Blue Hens’ goalie to take a 2-1 lead.

Onyeador made one more save on a Delaware header before time expired on the half, keeping the score at 2-1 going into the break. The save was Onyeador’s fourth of the half.

Coming back out for the second half, the Tribe looked for more of the same.

That came just minutes into the period. Trott netted his second of the night in the 55th minute, lofting a shot over the goaltender and into an empty goal. Ngoh tallied an assist on the goal, giving the Tribe a 3-1 advantage.

Even faced with a substantial two-goal deficit, the Blue Hens clawed back into the game just seconds later. On the end of a pretty passing play, midfielder Ryan Mertz put the ball into the back of the net, cutting the College lead to one, 3-2.

However, that was as close as Delaware would get. The Blue Hens put four more shots toward Onyeador, but none were on target. The Tribe defense stood strong, blocking chances and clearing the ball.

Delaware had one last gasp in the 86th minute, as the Blue Hens won a corner kick, but the College did not allow so much as a shot attempt, holding on to a 3-2 win to advance.

The Tribe will now face No. 1 seed James Madison in the semifinal of the CAA tournament.

In the other semifinal, second-seeded UNC-Wilmington will match up against No. 3 Hofstra. Both matches will take place Nov. 9 in Harrisonburg, Va. The winners will compete for the CAA championship and a berth in the National Collegiate Athletic Association tournament Nov. 11.