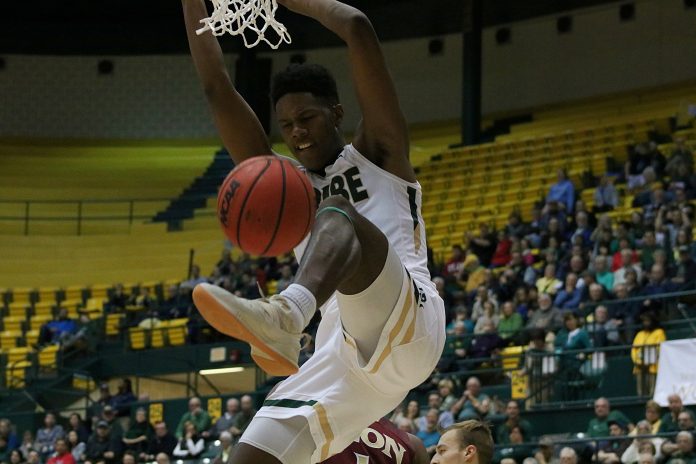 Offensively, the College veered away from the jumpers and three-pointers it has favored of late, opting instead to drive the ball to the basket. Ten minutes in, the Tribe had yet to hit a three but made 73 percent of its two-pointers, compared to just 41 percent for the Pride.

The Pride allowed its slow offensive start to translate into a lackadaisical defense, which the Tribe took advantage of immediately.

Despite struggling with turnovers yet again, giving up 11 points off eight turnovers in the first half alone, the College’s defense remained strong inside, frequently forcing Hofstra into outside shots that didn’t fall. In fact, the Tribe did so well at keeping the Pride out of the paint that it only tallied one block in the half by junior forward Justin Pierce.

A long three from redshirt junior guard Matt Milon and an answer from Hofstra with 10 seconds on the clock made the score 44-40 at the half, maintaining the lead the Tribe had held for nearly the entire game.

The College continued to force the Pride defense back on its heels in the second half, as Pierce turned a steal into a huge dunk a few possessions in, forcing Hofstra to call a timeout. In addition to contributing points, Pierce was unselfish with the ball throughout the game, leading the team with eight assists and making it possible for Nathan Knight to score a career-high 39 points, shattering his previous record of 32.

However, the Pride refused to be counted out, and its offense came back with a vengeance midway through the second half. Hofstra guard Justin Wright-Foreman hit two threes in as many possessions to tie the game with just under nine minutes left.

Undeterred, redshirt senior forward Paul Rowley hit a three from the corner, but Wright-Foreman, who finished with a school-record 48 points, answered with yet another three, making it 73-71 and giving the Pride its first lead in 27 minutes.

The College looked shaken, slowing a bit offensively. It allowed a drive to the basket that put the Pride up 75-71, its largest lead of the game. Knight responded with a huge dunk, but cracks began to appear in the Tribe’s defense, allowing the Pride to push inside and continue to score in the paint.

Sophomore guard Luke Loewe, who had scored just two points in the game, hit a jumper and then a layup to keep the Tribe in it, but with just under four minutes left, the Pride led the College 81-77.

Pierce sunk two free throws to cut the Pride lead to two, but the Pride responded with a basket. Knight scored from the block but missed the tying free throw, making the score 82-81 in favor of the Pride.

Missed free throws continued to plague the Tribe in its effort to tie the score, and the teams traded shots with varying degrees of success until the Pride led 89-83 with a minute left.

A final dunk from Knight narrowed the margin to 93-87, but the Pride was able to run out the clock and secure a tight victory.

Noticeably quiet throughout the game was freshman guard Chase Audige. The three-time Colonial Athletic Association Rookie of the Week, who averages double-digit scoring, tallied just six points, and his defensive presence was lacking. In spite of this, the College’s scoring finally returned to the level seen in previous seasons; the Tribe sunk 58 percent of its field goals.

Pierce’s playmaking and Knight’s outstanding performance, which earned him his seventh double-double in the past ten games, weren’t enough to help the Tribe hang on. The razor-thin margins of both this defeat and the earlier loss to Northeastern prove that the College can hang with the top teams in the CAA when it is shooting well and keeping the defensive pressure on its opponent.

After a bye on Thursday, the Tribe will travel to Elon Saturday, Feb. 16 to take on the Phoenix.