I can distinctly recall feeling disappointed as a child who initially loved the concept of Halloween. During most of my novice trick-or-treating experiences, I found my Jack-O-Lantern pail regularly severely lacking in Tootsie products, I frequently got really freaked out by a number of neighbor’s eccentric decorations and my mom often forced me to wear a long-sleeve shirt underneath my costume.

Now, there are several things that bother me about the Halloween season rather than just the festivities. First, Halloween is placed in an unfortunate season. I find that the generally tumultuous autumn weather in the Northeast and East Coast makes it difficult to encapsulate those extra spooky and festive vibes that the Halloween occasion needs and deserves. From certain Halloweens being preceded by weeks with 75-degree weather to my home state’s former governor, Chris Christie, canceling the holiday in advance of Hurricane Sandy seven years ago, Halloween is rarely perfect but is more commonly uncomfortable and undesirable.

Halloween preparation is scary enough in and of itself. My family dog would begin cowering in a corner early in the morning, knowing full well that one of us would be forcing her pudgy little body into an ill-fitting Yoda animal costume. As I got older, I began to sympathize more with my parents, who would recall that last year they ran out of eight pounds of candy by 8 p.m., so this year they ought to buy at least 11. Every once in a while, there were those too kind families, who naively believing in the intrinsic good of children, would leave out a bowl of candy with a note that read “Take One Please” accompanied by a smiley face.

However, with my first Halloween as a student of the College of William and Mary fast approaching, I am left relatively defenseless against the whims of the season. To be fair, I no longer have to worry about handing out candy, nor must I concern myself with dressing my dog as various Star Wars characters. And, even if it is cold outside, my mom can only tell me to wear a long-sleeve shirt underneath my costume over the phone — and what authority does that really give her?

I find that being a college student during spooky season highlights the consumption that small children and their parents prioritize, but seems to have little meaning to virtually everyone else. I know for a fact I was not the only child who sat in her costume on the floor in front of her TV categorizing her candy in a solemn, forlorn way knowing that the next day would soon be Christmas and that all her hard work collecting candy would soon be cast into oblivion. It’s as if one second Reese’s are pumpkin-shaped and then turn into Christmas trees the second the clock strikes 12:01 a.m. Nov. 1. But now, I’ve realized that a good number of my classmates absolutely don’t care at all how Reese’s are shaped, not to mention how old they might be. Are they from this Halloween or last year? Does it matter?

The answer is no, it does not.

Now, along with other hordes of other mostly post-teenage, mostly pre-adult, college-attending humans, we contribute best to the Halloween commercialization machine by purchasing costumes from pop-up Halloween cites or Amazon Prime. It would be unfair to fail to acknowledge the significant effort exerted by companies trying to sell the most ridiculous costumes this world has ever seen — I’ve seen a wide array of unimaginable concepts, but they truly lost me at “Sexy Ronald McDonald.” Nonetheless, there is something to be said about the creative component of strategically marketing distinct and eccentric characters by putting “sexy” in front of the description; and people are buying them. College students are actually buying them. So, apparently someone is doing something right. Right?

In this awkward in-between stage of childhood and adulthood, students at the College can agree that Halloween experiences away from home are likely drastically different than what one is accustomed to. We are faced with questioning our understanding of the holiday: is Halloween about pumpkin spice and “Twitches,” or is it about a provocative Amazon-primed “Sexy 5-Piece Deadly Ninja” costume (784 reviews), or babies and dogs dressed against their will or knowledge for the amusement of onlookers? I’ll leave that for you to decide, but maybe it’s all of the above. 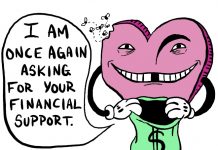