Thursday, June 25, the College of William and Mary announced that it will create a working group tasked with developing frameworks for renaming and naming campus buildings. The College’s decision follows the circulation of numerous student-run petitions on social media which sought to rename structures on campus memorializing Confederate leaders and supporters of slavery.

In a press statement, Chief Communications Officer Brian Whitson announced that the university’s Board of Visitors had charged College President Katherine Rowe with forming the committee, which will consist of students, faculty, staff and administrators. Whitson said that the committee’s principal objective will be to craft cohesive principles for appropriately redesignating buildings and spaces on campus, and also referenced the university’s previous steps to acknowledge problematic aspects of the College’s historical legacies with the Confederacy and slavery.

“The university took action in 2015 to remove the most visible manifestations and iconography of the Confederacy from campus, including a Confederate plaque that hung in the hallway of the Wren Building and two emblems on the College Mace carried at William & Mary’s signature events,” Whitson said in the press statement. “By early August, the working group will review any others and recommend actions to address, rename or contextualize them.”

According to the press statement, Rowe asked the new committee to submit a preliminary outline of its proposals by August, at which time the group will codify principles for renaming buildings and provide suggestions for how to better contextualize existing markers around campus. The working group will also submit a final landscape review to Rowe’s office by February 2021, identifying specific buildings, structures and spaces on campus deemed hostile to an inclusive environment.

“Because of William & Mary’s history, we have an obligation to continue the important moral and intellectual work of revisiting whom and what we commemorate.”

The group will be chaired by College advisor Warren W. Buck III M.S. ‘70, Ph.D. ‘76, D.Sc. ‘13 and includes prominent faculty and staff, including Jody L. Allen Ph.D. ‘07, director of the College’s Lemon Project alongside other professors and student leaders.

Rowe said that the working group will complement the College’s existing efforts to critically examine its relationships with racial discrimination.

“If any institution can approach complex questions about its institutional memory in evidence-based and nuanced ways, it is a university – and especially this university,” Rowe said in the press statement.  “Because of William & Mary’s history, we have an obligation to continue the important moral and intellectual work of revisiting whom and what we commemorate. William & Mary has engaged for over a decade in sustained scholarship and forthright self-examination of the institution’s history of slavery and racism. This working group will advance how the university implements the lessons learned, now and for the future.”

This is a breaking story and may be updated. Last updated 10 a.m. Thursday, June 25. 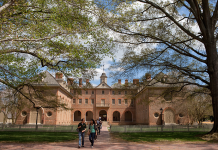