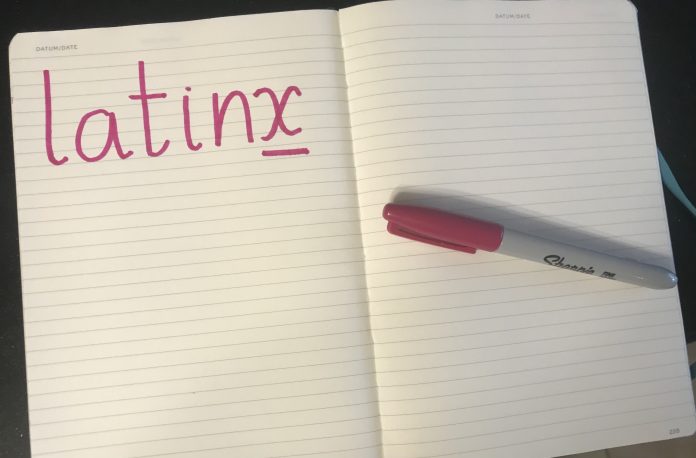 In the presidential election several weeks ago, President Donald Trump significantly improved his vote share relative to 2016 among voters who identify as Hispanic or Latino. The most significant rightward shifts among these communities occurred in South Florida and South Texas, but, as all the votes have been counted, it has become clear that support for the President and the Republican Party has grown nationwide among Hispanics/Latinos, from the Bronx to the Dallas suburbs to Southern California. In the wake of these results, there has been much discussion on both the left and right of the political spectrum over the use of the term “latinx.”

First, let me be very clear about my background. I do not identify as Hispanic, Latino or Latinx. I am white, cisgender and male, and am of mostly English and German ancestry. I do not speak Spanish natively. I have studied Spanish for about four years, and I have had the privilege to spend the past two semesters serving as a Teaching Assistant in the Hispanic Studies department. I have immense respect and nothing but praise for the department’s leadership and every member of its faculty, especially during these sad and challenging times.

As part of my responsibilities as a Teaching Assistant, I often address emails and messages to the students in my course compañerxs. Compañerxs means “companions;” I like this word because it indicates that I am not anyone’s superior. I have no influence over grading besides taking attendance and I never teach new material in my review sessions or on Fridays when I lead class exercises. The tricky part comes with the penultimate letter. Why do I use the letter “x” instead of the letter “o?”

“The tricky part comes with the penultimate letter. Why do I use the letter “x” instead of the letter “o?”

In a case like this, I am basically using a form of the term “latinx.” The idea is to replace the “o,” usually indicating that the noun, pronoun, adjective, or article in question is masculine, with a more explicitly gender-neutral “x.” This has the effect of including non-binary/genderqueer people in the group of people I am referring to when I say “compañerxs.” It also more explicitly includes women, since the feminine is the marked gender in Spanish and is usually indicated by an “a.”

There are some who really dislike this practice, many of whom are Hispanic or Latino. Congressman Rubén Gallego of Arizona, a Democrat, said in a Nov. 4 tweet in response to a question about how Democrats could improve their performance among Hispanic/Latino voters: “First start by not using the term Latinx. Second we have to be in front of them year round not just election years. That is what we did in AZ.”

José A. Del Real, a reporter on The Washington Post’s national political enterprise and investigations team, seemed to second Gallego’s opinion in series of tweets Saturday Nov. 22: “In practice, almost nobody uses ‘latinx’ except for activists.” Del Real continues, “Activists on the left have become, like, militant about its usage, even while a lot of people in Latin America descent themselves are unconvinced … Meanwhile, the use of latinx has become remarkably mainstream in corporate and institutional settings even though *basically nobody uses it to describe themselves* outside of a very niche milieu.”

This tweet made me stop and think. Am I a militant activist on the left for using latinx? I can’t speak to the statistical prevalence of “latinx” among the Hispanic and Latino population of the United States, but I do tend to agree with Del Real in that I have rarely encountered the term outside of the College of William and Mary or large websites such as Spotify or Netflix.

Over the summer and the early part of the fall, I worked as an enumerator with the U.S. Census Bureau. I am extremely proud to have been a part of the 2020 Census operation and the experience of helping count my community was profoundly humbling. I live in southwest Virginia and was one of the few Enumerators in my zone who spoke Spanish. As such, I was often sent to homes where people could speak Spanish but not English. As part of the dozens of interviews I conducted, I was required to ask respondents about their gender, ethnic origins, and racial identity. In 2020, the census form allowed the respondent to select between the binary male and female genders (with no other option) and asked whether or not the respondent was of “Hispanic origin.”

To identify their race, the respondent had to select from the following options (worded and ordered exactly as follows): White, Black or African American, American Indian or Alaska Native, Asian, Native Hawaiian or Pacific Islander, or Some Other Race. Most of the families I spoke to who claimed Hispanic origin chose “White” as their race while some chose “Black or African American” or “Some Other Race.”

The form also allowed the respondent to specify more exactly their origins or heritage (e.g,, Armenian, Bosniak, Taiwanese, etc.) or any other designation they would like to apply to themselves. I do not recall having encountered a single family or individual, Spanish or English speaking, who instructed me to write latinx in this space.

“But I feel there is so much emphasis on inclusivity in the College’s culture that going against the grain on latinx would be fighting to destroy the spirit of a place that just wants everyone to feel appreciated.”

The reason I use latinx is mainly twofold. First, my professors and superiors in the Hispanic Studies department use it in their official correspondence, and I take my cues from them. Second, and more importantly, I know many non-binary and genderqueer people at the College, and if they were enrolled in one of my Spanish classes I would want them to feel as comfortable and welcome as possible. The more comfortable and welcome everyone feels together, the easier it is for everyone to learn to speak Spanish, which is what I really love to do and why I’m a TA.

Gender in Spanish is complicated and hard to explain to someone who has little or no experience with the language. In Spanish, every single noun in the language is either masculine or feminine. There are no exceptions to this rule, and if you find one, please let me know. Grammatical gender and the concept of human gender are distinct but related, and in some cases, there can be a gray line in between the two. Hemingway in “The Old Man and the Sea” writes of how the old man, an experienced Cuban fisherman, calls the sea ‘la mar,’ as if it were a feminine noun, because of the sea’s feminine qualities, while the more callous younger fishermen use the usual masculine ‘el mar.’

Much of the criticism of latinx seems to revolve around its impracticality. Frankly, at the College, I find it impractical not to use latinx. Yes, it is much harder to say in Spanish than it is in English — I really only use it in writing — and it requires a bit of extra thought when you’re stringing together a sentence. But I feel there is so much emphasis on inclusivity in the College’s culture that going against the grain on latinx would be fighting to destroy the spirit of a place that just wants everyone to feel appreciated.