During the past decade a lot of ink has been spent in an attempt to understand the organization and psychology of student protests. The standard reading has been that, following the tide of college activism which swept across the globe in the 1960s and 1970s, the “me generation” of the 1980s and 1990s was more interested in securing jobs than in righting wrongs. This, of course, is a grievous over simplification — complaining is one of students’s most cherished traditions, next to drinking — but generally protests have declined in number and participants. Beginning in the new millennium, however, rumblings began of a new wave of college activists that would bring back the glory days.

Monday’s activities, although small even by the College of William and Mary’s standards, testified to this. In fact, the recent campus activity of the Living Wage Coalition is directly in line with national trends of campus activism.

From the start, labor rights have been central to the last decade or so of student protests. One researcher argues that the story begins with the AFL-CIO’s mid-90s reorganization which focused a large portion of its budget on organizing efforts. This new organization paid special attention to students, and the mega-union put thousands through its Union Summer program with the explicit goal of using ex-interns to influence students to take action on labor initiatives.

The strategy bore fruit in the late ’90s with the rise of student anti-sweatshop campaigns, where the first major initiative was initiated by a former Union summer intern. When backed by organized labor and especially by UNITE, a union which represents apparel workers and had an interest in combating low price imports, students successfully convinced many universities to be more conscientious when purchasing school apparel.

As in most protests, the anti-sweatshop campaign was not a one-issue movement and consequently drew like-minded students together along many lines. The living wage campaign can be seen as one of its descendants. The movement came of age in 2001. That year, the Harvard Progressive Student Labor Movement initiated a highly visible, and eventually successful, campaign to protest the wages of university employees. Several other universities soon followed suit, and the College is only a relative latecomer to the game.

These current labor-centric campus movements are distinct from the protests of the ’60s in several ways. For one, they are relatively small. The groups do not represent a large population on campuses, but rather a very vocal minority. Although many students may agree with their aims in theory, most are usually indifferent at best. However, technology, especially the internet and social media, allows activists to gain resourses and advice from similar groups. It also encourages the formation of similar movements on other campuses.

The final trend in this sort of student activism is the necessity of spectacle. Because the groups are small and most students and administrators are indifferent to them, the easiest way to draw attention to their cause is through disruptions. Many of the anti-sweatshop protests only achieved their goal after members occupied administrative buildings. The Harvard PSLM took similar recourse and after sustained protests at Harvard Yard, which reportedly caused students living nearby to file 100 noise complaints, 26 activists staged a weeklong occupation of a building. Other groups soon followed this tactic. In fact, most significant concessions to living wage movements seem to follow disruptive, sustained protests. It is also interesting to note that the utility of such a tactic is not in converting other students or faculty to the cause, since in many cases students become increasingly annoyed with the protesters. Rather, it seems it is the annoyances and media attention engendered by these sorts of protests which prompt official concessions.

These trends also seem to hold for the College’s incarnation of the living wage movement, though I don’t see students occupying buildings here. 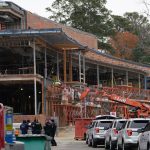