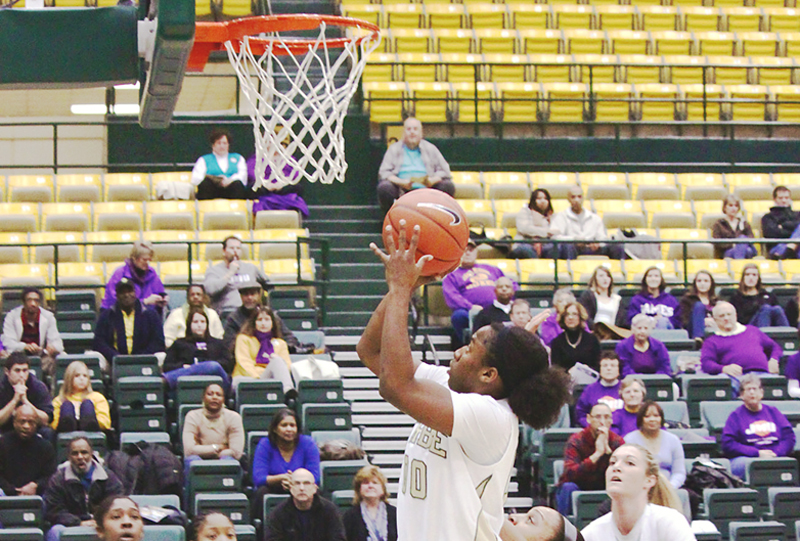 It was the classic sports matchup: William and Mary’s high-powered scoring attack against James Madison’s suffocating defensive pressure. All said and done, though, the old adage of defensive supremacy held true as the Dukes (14-4, 5-2 CAA) scored a 50-40 win over the Tribe (8-10, 1-6 CAA). It was the College’s fifth straight loss, leaving the team with the second-worst conference record in the CAA.

“These last few losses hurt and this last one was probably the worst out of all of them,” junior center Jaclyn McKenna said.

The score hid one of the biggest in-game swings all season for the College. With the Tribe up by 10 with nine minutes to play, the Dukes began a full court press, seemingly taking the College by surprise. Two quick turnovers helped bolster the Dukes, who ripped off a remarkable 20-0 run.

“We had a good start, but then whenever they came back in the second half we didn’t make a big enough push to fight back and we just let them win it,” junior forward Emily Correal said.

JMU put on a defensive showcase and stifled the Tribe’s attack, forcing the College into 23 turnovers on the day.

The College, which recently has made a habit of falling behind early only to make late runs that have ultimately come up short, actually jumped out to the early advantage. JMU turned the ball over on six consecutive possessions to open the game, and the College was up 17-11 at the 8 minute, 38 second mark in the first. Defensive pressure continued to force JMU into poor shots, and the Tribe worked hard on the boards, outrebounding the Dukes 28-21 in the first.

The Tribe also turned its defensive effort into fast break chances, and senior guard Katherine DeHenzel brought the crowd to its feet with a stellar stop-and-go move on a breakaway to push the Tribe lead to 21-14 with 4:47 left in the half.

Winning the points in paint battle 14-8, the College would go on to take a 26-16 lead — its biggest of the day — into the locker room. But the tables would soon turn in the post, as the Dukes outscored the Tribe 24-6 in the paint during the second half.

“I felt like the whole game it was just a fight in the post,” Correal said. “And no matter what, if you’re going up for a rebound or posting up or just standing there you’re getting hit — so it was just a battle the whole game. I guess we just weren’t able to convert.”

With roughly 10 minutes left in the second, the Dukes switched from a man-to-man defensive scheme to zone play. JMU head coach Kenny Brooks coupled that with a full court press, and the Tribe offense began to sputter.

“Offensively, we were a little slow both halves,” McKenna — who finished the day with a team-high 11 points — said. “But the second half we were just really unorganized when they switched into the zone and started putting pressure on. We haven’t played against that kind of pressure the last few games, at least not in the full court; I think it kind of shocked us more than it should have.”

The Tribe was held to just two points in the final 10:30 and shot just 17 percent from the floor in the whole second half. Both teams shot poorly, with the Dukes going 19 of 68 and the College hitting just 16 of its 62 field goal attempts.

“We were tough, we played hard on the boards, we played hard defensively,” head coach Debbie Taylor said. “All we talked about tonight before the game was finishing, and we’re going to have to go back to square one and learn how to finish. In this league, every night the game will come down to the end.”

Falling to 1-6 in conference play, the College faces an uphill battle the rest of the season.

“We had this fire to want to win, and now … the look on our faces at the end of that game … with 10 minutes to go, when we were leading by 10 and they did a little run … People are going to run, this game is about runs,” Taylor said. “They run, and you run back. You let their fans get in it; you take them back out of it.”

The Tribe will return to action on Thursday when Old Dominion visits Kaplan Arena.