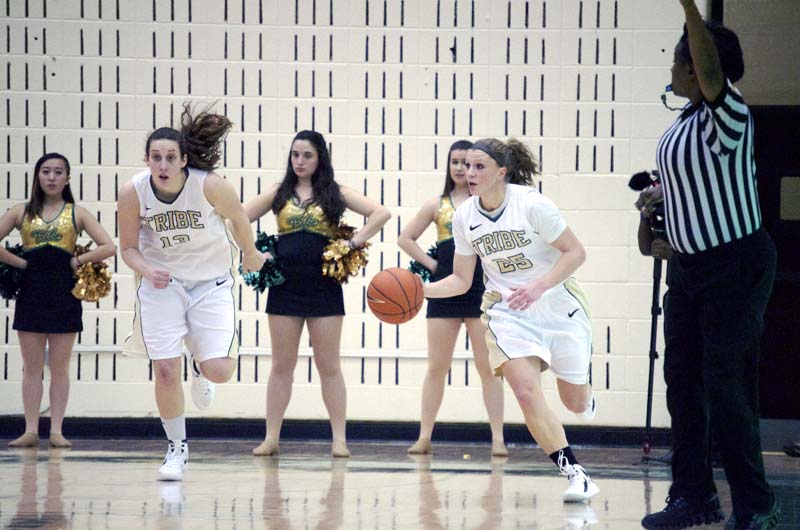 Despite a record-setting shooting performance from junior guard Janine Aldridge Sunday, William and Mary fell on the road to Northeastern 82-71.

In what’s been a recurring theme for the Tribe (9-11, 2-7 CAA) this season, the team’s high scoring output wasn’t enough to overcome an abundance of turnovers and a poor defensive performance. The College lost the turnover battle 19-8 while committing a whopping 13 fouls — which turned into 14 points from the line for the Huskies — in the second half. See the full box score here.

The bright spot for the Tribe was another stellar shooting display from Aldridge, who set both the single-game and career school records for three-pointers with nine. The junior, who took all of her shots from downtown, went 9 for 19 from behind the arc to finish with 27 points, four assists, four rebounds and three steals. The New York native is the team’s leading scorer, averaging 15.6 points per game, as well as the conference-leader in three-pointers made with 75 on the season.

Aldridge’s game-opening three-pointer gave the Tribe its only lead of the day, as Northeastern’s Christine Huber answered with a three-ball of her own to kick off an 11-2 run for the Huskies. The College would pull to within three with 15 minutes, 17 seconds to go in the first, but Northeastern turned 11 turnovers into as many points, stretching its lead to as much as 14 before going into halftime with a 35-23 advantage.

The second period was much of the same, as the College would stay within shouting distance, keeping the deficit mostly in the high-single digits. Around the midpoint of the half, the Tribe launched a 14-5 run that — after a layup from junior forward Emily Correal, who finished with 12 points and five rebounds — cut the Northeastern lead to five with 6:44 left in the contest.

But the Huskies quickly turned it back on, knocking down a three-pointer and going on a 12-2 run of their own. From then on, the College couldn’t pull any closer than eight points down. Outscoring Aldridge was Northeastern’s Deanna Kerkhof, who hit five three-pointers of her own to finish with 29 points, six rebounds and three steals.

Despite the game never being all that close, most statistical categories were very even. The Tribe shot 44.1 percent from the field while the Huskies shot 44.3 percent, the College lost the rebounding battle by just three and even finished with more points in the paint, more second-chance buckets and more bench scoring.

What made the difference, however, were turnovers and fouls. The College could muster just six points from the line while Northeastern finished with 17, and the Huskies scored 18 points off turnovers, double the amount for the Tribe.

In a frustrating trend for head coach Debbie Taylor, Sunday was the fifth time in the last seven games that the Tribe has scored more than 70 points and still lost. Amazingly, the team has the second highest-scoring offense in the CAA, averaging 71.7 points per game, yet is the only squad in the top five of that category with a losing record. That is explained by the Tribe’s defense, which is 10th in the 12-team conference, allowing 70.3 per game.

The Northeastern loss came just days after the Tribe’s historic win over Old Dominion in Williamsburg, which ended a 52-game Tribe losing streak to the Monarchs, but continues the team’s late slide. The College may be happy that the month of January — in which the team went 2-6 — is coming to a close, but that doesn’t mean that the start of February will be any easier, as three of the College’s next four games will be against teams in the top five of the conference.

First up is second-place Hofstra, who the Tribe will face in Hemsptead, N.Y. Thursday.

Sitting in 10th place in the CAA, the team will need to quickly turn things around in its final nine games in order to improve its seeding in the conference tournament, which will begin in a little over five weeks in Upper Marlboro, Md.