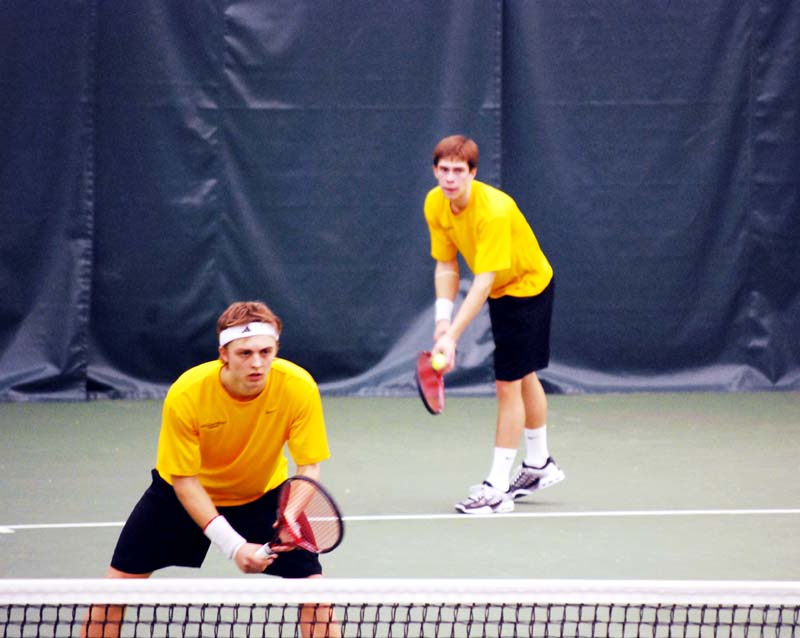 After an unsuccessful Midwest road trip, William and Mary returned home in dominant fashion, winning two out of three matches this past weekend in the Tribe Kickoff Tournament at the McCormack-Nagelsen Tennis Center in Williamsburg.

The College notched a 4-3 victory over Iowa Saturday morning, and then went on to dismantle George Washington, 4-1, in the nightcap. The College then returned to the court Sunday, suffering a 4-0 loss to Dartmouth. The Tribe’s 2-1 performance in the tournament brings its record to 4-3 on the young season.

The College entered the Tribe Kickoff Tournament seeking to stabilize an uneven early-season stretch. The College won its first two matches against Maryland Baltimore-County and Richmond in dominating fashion, but was roughed up by Northwestern and No. 28 Notre Dame.

The Tribe’s weekend began against the Hawkeyes, and the squad found itself in an early hole. Iowa dominated the doubles play, as its No. 1 and No. 3 doubles teams prevailed over their Tribe counterparts.

Down one, the College attempted to quickly reverse its fortunes in the singles matches. Sophomore Ben Guthrie struck first, earning a 6-2, 6-4 victory over Iowa’s Mitch Beckert to tie everything at 1-1. From there, junior Anton Andersson fell to Iowa’s Will Vasos at the No. 1 spot in a closely contested 6-3, 1-6, 7-5 match. The Tribe and Hawkeyes then traded a pair of singles victories at the No. 2 and 4 spots, tying it again at two all.

Then came the break in the Tribe’s favor. Graduate student Robert Piertrucha knocked off Iowa’s Garret Dunn to give the College a slight advantage. All eyes then turned to the No. 5 match, which pitted sophomore John Banks against Iowa’s Matt Hagan. Banks won the first set, 6-3, but then fell to Hagan 6-7 in the second set, forcing a crucial third set. Banks then recorded a 6-4 victory in the third set, clinching the match for the College.

Following its morning victory, the Tribe headed back to McCormack-Nagelsen that evening in search of its second win of the day. George Washington, who opened the tournament with a 4-2 loss to Dartmouth, sought redemption for their earlier loss.

The Colonials opened by winning the doubles point, 2-1, but they could not muster another point against the Tribe. The College won the No. 6 spot by default, and then reeled off victories at the No. 3, 4 and 5 positions to seal the victory. Sophomore Ben Hoogland easily defeated GW’s Ulrik Thomsen, 6-1, 6-1 at the No. 3 and Pietrucha downed the Colonials’ Viktor Svensson, 7-6, 6-4. Banks, who played at the No. 5, once again served as the clincher, downing GW’s Richard Blumenfield, 6-4, 4-6, 7-6.

The next day, the College took a 2-0 weekend ledger into the final match of the tournament against Dartmouth Sunday. The doubles match was closely contested. The Big Green No. 1 team defeated Andersson and junior Adrian Vodislav, 8-2, but the Tribe responded with an 8-6 win at the No. 2 spot courtesy of Guthrie and Banks. Dartmouth then recorded the crucial victory at the No. 3 spot, as freshman Will Juggins and senior Ilja Orre fell 9-7 in a hotly contested match.

With the doubles point in hand, Dartmouth advanced to the singles matches with a 1-0 advantage. Dartmouth then stormed through the singles matches, notching three victories before the Tribe could manage one. Dartmouth’s Sam Todd downed Banks, 6-2, 6-4 at the No. 6 position, then Chris Kipouras defeated Hoogland, 6-0, 3-6, 6-1 at the No. 4. Already up 3-0, Dartmouth’s Cameron Ghorbani — the No. 82 player in the nation — delivered the final blow, spurning Vodislav, 4-6, 6-3, 6-4 to clinch the match.

Although the Tribe ended its weekend on a sour note, it still notched two important victories Saturday. The College will seek to improve its record this weekend when it plays host to Yale, Longwood and Morgan State.