Home Opinions It’s not a fake 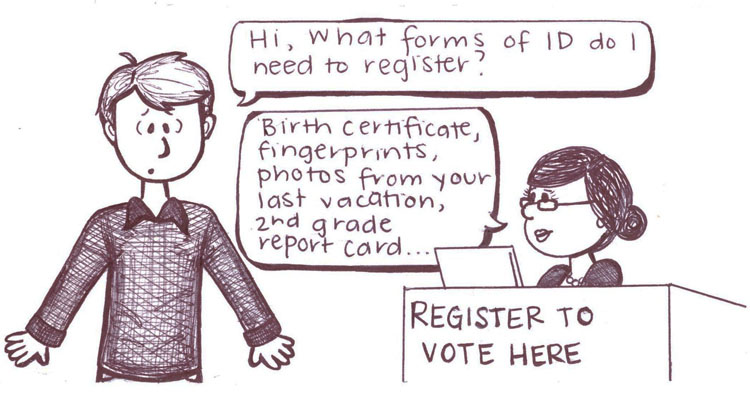 As freshmen arrive for orientation at the College of William and Mary in August, they are always given paperwork to register to vote in the City of Williamsburg. These campaign efforts have been extremely successful, especially for out-of-state students who are affected by the Virginia General Assembly’s decisions. While political involvement seems to come in waves at the College — spans of relative quiet are broken by huge movements, such as the election of Scott Foster ’10 J.D. ’14 — it is important that students are always vocal and informed about political issues affecting the College, which is why a law that potentially could have prevented out-of-state students from voting in Virginia elections was so alarming.

A new law passed by the General Assembly requires voters to have photo identification to vote. The initial drafts of the bill would not allow college IDs to serve as proof of identity, which would mean that only those students with Virginia driver’s licenses could vote. The Student Assembly, along with other campus organizations, immediately stepped up to make sure that both its voice and the voices of students at the College were heard.

SA President Kaveh Sadeghian ’12 and Vice President Molly Bullman ’12 both expressed concern over the new law, urging students to contact their state delegate and state senator to express the concerns of the students at the College. Students received an email with a draft of a letter to send to state delegates, asking the bill be revised.

The engagement of the SA and other organizations at the College — not to meantion colleges around the commonwealth — prompted the General Assembly to add an amendment to add student IDs to the list of acceptable photo identification.

The fact that the amendment passed with the aid of students from the College show shows the immediate impact of directed student action and how powerful students can be when they join together. The SA was able to affect change to benefit students at the College because it worked with a variety of organizations that all became involved in the issue. This should not just be an isolated incident of student organizations working together; we want this to be a trend that will continue to improve the College.

Students need their opinions to be heard — not just in the Williamsburg community, not just through Road to Richmond, and not just when a student is running for an elected position. Students need to recognize the power they have when they join together and directly confront issues head on. We hope that the student involvement in amending this bill indicates a growing interest in politics that will continue to evolve. Students often complain about the regulations imposed by the City of Williamsburg and the funding allotted to the College by the General Assembly, but without student involvement, none of these issues will be addressed. It doesn’t take long to call a delegate or a senator to discuss the details of a bill — even an email could suffice.

We applaud the SA and the other organizations in campus who played a role in getting students involved. It’s nice to see student action produce immediate results, but we don’t want the involvement to stop here. We hope campus organizations come together more often, especially when it comes to protecting students’ rights. Students’ voices exist to be heard.