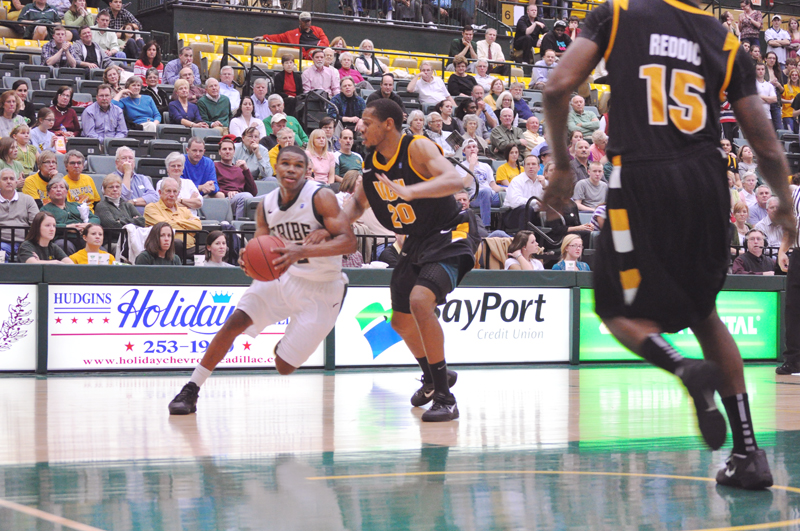 Coming off the best win of its season — a 79-54 beatdown of Northeastern — William and Mary continued its streak of hot play, taking conference-leader Drexel to the wire before falling by a score of 63-61 in Philadelphia.

After leading by one with 3 minutes, 30 seconds to go in the game, Drexel (22-5, 14-2 CAA) grabbed hold of the game down the stretch, extending its lead to six points with just 43 ticks remaining.

But the College (5-23, 3-13 CAA) fought back with a pair of quick layups, followed by intentional fouls. Sophomore guard Brandon Britt then knocked down a long three pointer to make the score 62-61 in Drexel’s favor with 2.4 seconds left. The College fouled immediately on the ensuing inbound, and Dragons guard Frantz Massenat went to the line. Massenat would miss the first before connecting on the back end, and the game hung in the balance as the Tribe set to inbound, down two with just two seconds to go.

Junior guard Matt Rum sent a long pass to senior forward Quinn McDowell, who stood about 30 feet from the hoop, but McDowell was unable to gather the pass and keep his feet, falling to the floor as the clock expired.

The win was the 14th straight for the Dragons.

Coming off the bench for the second game in a row, freshman guard Marcus Thornton led the way for the Tribe’s offense, scoring 13 points, grabbing four rebounds, and dishing two assists while turning the ball over just once.

“Tim’s playing great right now,” Shaver said. “He’s playing with a really high level of toughness. He missed a lot of our season, and he’s really rounding into his own right now. Drexel’s a big, physical basketball team, and Tim did a terrific job offensively, defensively, on the boards, every stretch of the imagination. He’s playing with a lot of heart.”

The game was a tale of two halves, as the College’s offense struggled mightily to find a rhythm over the first 20 minutes, shooting just 37.5 percent from the floor. But the defensive effort was solid, holding Drexel to an only slightly better 38.7 percent mark in the first, and the Tribe kept the Dragons within reach as halftime came with Drexel up 31-25.

A layup by Dragon Samme Givens to open the second half gave Drexel its biggest lead of the second period, but the Tribe continued to hang around, cutting the lead to just one. After a Drexel miss, Shaver took a timeout, but whatever was drawn up didn’t work very well as Rum was forced into a desperation three with the shot clock winding down at the 11:21 mark. The shot was off, and Derrick Thomas pushed Drexel’s lead back up to four with a trey on the next possession. It wasn’t until 3:30 was left in the contest that the College actually took its only lead of the second half with a Rusthoven layup.

The second half saw a much-improved offensive output for the College, as the Tribe shot 60 percent from the floor in the final period. The defense remained strong, as Drexel finished the game at 42.3 percent. Shaver attributed some of that to the lineup changes that have, among other things, moved Thornton out of the starting five (the freshman is still receiving ample playing time, he logged 26 minutes in Philadelphia).

“Our defense has really improved. We’ve been up and down defensively,” Shaver said. “But we made some lineup changes that have been a factor. Right now our best offensive lineup is our worst defensive lineup, so we’ve had to make some adjustments with that. … As a result, all the guys seem to be getting better and that’s exciting.”

With three games left before the conference tournament, the Tribe will next travel to Lexington, Va. for a Bracketbusters matchup Saturday with Big South opponent Virginia Military Institute.