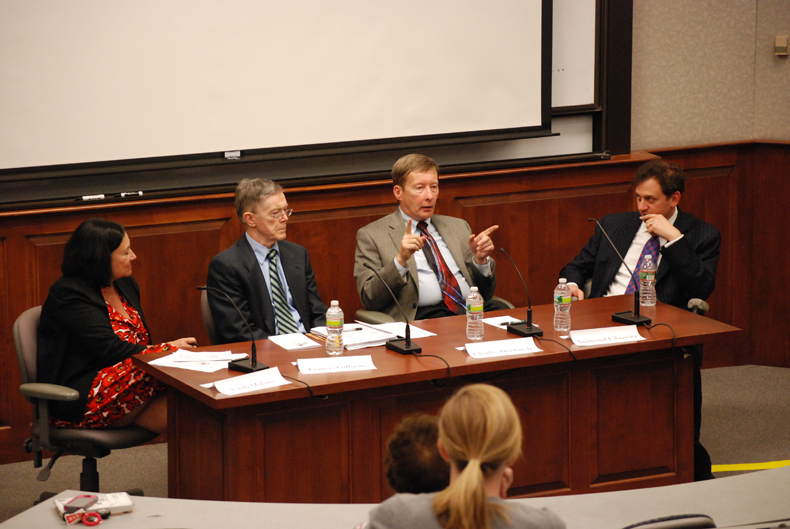 The idea was born in a classroom at the University of Maryland School of Law. While reading court cases in class, Sig Libowitz, now a lawyer from Venable LLP, came across a case concerning suspected “unlawful enemy combatants” who were being detained in Guantanamo Bay. Inspired by what he had read, Libowitz decided to create a film based on the subject.

“I thought, ‘There’s an incredible movie in this,’ and I wanted to make that movie,” Libowitz said Tuesday in a panel discussion at the Marshall-Wythe School of Law. “I didn’t want to wait.”

The product of Libowitz’s efforts was the 30-minute drama “The Response,” which was shown prior to the panel discussion. Libowitz co-produced, wrote and acted in the film, which was shortlisted for the 2010 Academy Award in Short Film and is currently being screened around the country.

“It’s really been a word-of-mouth type experience,” Libowitz said. “As people started seeing it, they asked us to do more screenings. We have screened this thing for the military, for groups like Amnesty [International] and ACLU … for different organizations north, south, east, west and I think that really says something.”

“The Response” follows three U.S. military judges deciding whether or not to classify a specific Guantanamo detainee — a man accused of working with al-Qaeda — as an enemy combatant. The term “enemy combatant” was used by the former President George W. Bush’s administration after the Sept. 11 attacks to describe a suspected member of al-Qaeda or the Taliban. These alleged enemy combatants were held at Guantanamo Bay indefinitely and were not guaranteed the right to a civil trial but were tried by a military tribunal instead. The film depicts a non-public hearing in which the detainee is frustrated that he is not allowed to see the classified evidence the military officers have against him.

Following the film’s screening, the panel — made up of Libowitz, former Deputy Judge Advocate General for the U.S. Air Force Charles Dunlap, Jr., and Director of Training for the Military Commissions’ prosecutors Francis Gilligan — discussed some of the issues addressed in “The Response.” Marshall-Wythe Foundation Professor of Law Linda Malone acted as the panel’s moderator. The panel also took questions from the audience.

“I just think it’s a valuable film because it sets up the discussion that we’re having,” Dunlap said.

All three panelists emphasized the fact that the tribunal shown in “The Response” is not representative of the current process that decides a detainee’s fate, since the tribunals like the one shown in the film were eventually ruled inadequate by the U.S. Supreme Court and have been modified in recent years.

“With the benefit of hindsight, we realized that we were wrong then, and we needed to reform the process,” Dunlap said.

Malone summed up the group’s thoughts: Overall, the system has improved over time.

She also stressed the importance of looking at the flaws with the previous tribunal system to prepare for the future.

“Going forward, what we’re now going to see is that ‘The Response’ shows what was done wrong at stage one, and we need to remember that and keep that in mind,” Malone said.

Nadja Wolfe, J.D. ’14, who attended the film screening and the panel discussion, said she found both aspects of the event enlightening.

“I thought [the film] posed some really interesting questions,” she said. “I was naturally sympathetic to the causes of Guantanamo Bay, so it was good to have the perspectives of the gentlemen on the panel. I’m glad they think things have changed a lot.”

In the discussion, Libowitz emphasized the importance of Guantanamo Bay today, more than ten years after the Sept. 11 attacks.

“It’s been more than ten years, but Guantanamo continues to resonate,” he said. “Everywhere we go, people are interested in what’s going on and what’s happening. There has been a tremendous amount of progress on a lot of fronts, and it’s changed in a lot of ways. … I think it’s important to note that people have this idea of Guantanamo, but at its height, Guantanamo only housed 800 detainees. If not for these Supreme Court cases, these stories wouldn’t necessarily come out.”

The panel also talked about the significance of the film’s title in terms of how the United States responded to the Sept. 11 attacks.

“There’s a reason this film is called ‘The Response,’” Libowitz said. “In many ways, our response to [Sept. 11] is more important than what happened to us because it defines who we are, and I think these types of debates are really important.”

Dunlap agreed, stressing the importance of having the correct response at the right time.