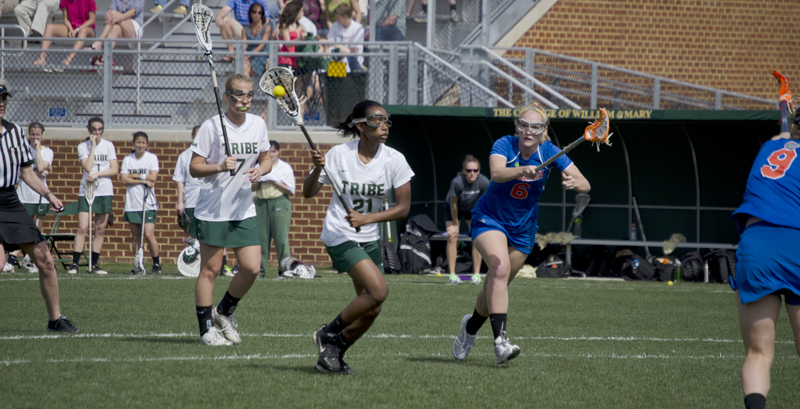 With CAA tournament qualifications on the line, William and Mary eyed Sunday’s match against Delaware as a critical, must-have game. The College, mired in a seven-game losing streak, needed to secure its first conference win of the season after dropping a pair of close matches to Old Dominion and Towson.

The Tribe held the Blue Hens scoreless in the final 18 minutes of the second half and made a late rally, but the frantic finish came up short as the squad dropped its eighth straight loss with a 12-11 defeat at Martin Family Stadium.

The game was made up of two entirely dissimilar segments — one dominated by the College, the other by Delaware. Tellingly, the Tribe’s supremacy spanned only the first 10 minutes, while the Blue Hens controlled the rest of the first half.

“We came out strong, and I don’t know if we got too comfortable,” head coach Brooke Ireland said. “We didn’t stay disciplined and forget to communicate. I think that’s a theme, we did not communicate.”

The Tribe started the game in impressive form as senior attacker Maggie Anderson delivered four tight goals in the first 10 minutes, but that would punctuate her squad’s commanding opening salvo. During this stretch, the Tribe owned possession and were nearly always on the offensive.

Just as the College gained control, Delaware shifted the game back toward the home goal and kept it there for the remainder of the first half.

“We play well when we’re playing well, and we tend to play worse when things get down,” freshman goalkeeper Coleen Nofi said.

After the initial 6-1 start, the Tribe looked helpless as the Blue Hens cranked nine straight goals built off precise passing and face-off skill. The College was forced to stay on the defensive as Delaware won nine of the 16 face-offs in the half. Freshman goalie Lucy Ferguson could do little to dissipate the constant onslaught of the Delaware attackers as they rattled off goal after goal.

With the momentum of the game fixed against them, the Tribe went into halftime down 9-6. Ireland pulled regular starter Ferguson for Nofi going into the second half.

“I don’t normally like to switch goalies, but I just felt that, Lucy Ferguson, who normally has such a large presence in goal, lost a lot of her momentum,” Ireland said. “So I wanted to take her out and put in Colleen Nofi, a very good goalie, and give Lucy a mental break. And I think she did a very good job.”

The College got off to another enlivening start in the second half as sophomore attacker Taelor Salmon blew by her defender before bounding and twisting herself into a clear shot on goal and finishing with momentum back on her squad’s side. Following her teammates example, sophomore midfielder Jenny Michael zinged another one past Delaware goalie Alex Zaugra.

With the Tribe down by a mere one goal after having scored two straight, the Delaware attackers quickly neutralized the score with two quick successive goals of their own. Then, the Blue Hens conservatively held possession of the ball behind the College’s net for close to four minutes before strategically depositing it to a Delaware striker who whirled around her defender and scored a demoralizing goal.

In perhaps the most instrumental aspect of the game, Delaware extended their face-off dominance in the second half, only losing one of nine. This key advantage allowed the Blue Hens to get 33 shots on goal to the Tribe’s 18 on the game.

“If we can’t win the draw, we can’t get it on offense,” Ireland said. “Then, we spend many, many minutes playing on defense.”

Even with Delaware painstakingly squeezing time off the clock, the Tribe worked to come within two goals with a minute left, but Delaware’s defense made sure that the College’s opportunities were few and far between.

“Delaware had a pretty good defense,” Salmon said. “Once they got it, they hold onto it for a long time and that’s why a lot of the time got away from us.”

Yet Salmon scored another energetic goal with 12 seconds left on the clock to bring the Tribe within striking distance of the tie.

“At the end of the game, I felt like it was just one shot, one opportunity,” Salmon said. “The time was going down, chances were getting slim so when we have it, we had to go and take it.”

The final whistle blew before she could make her presence felt again and the College left the field in a most precarious position — tied for last place in the CAA with just four games left.