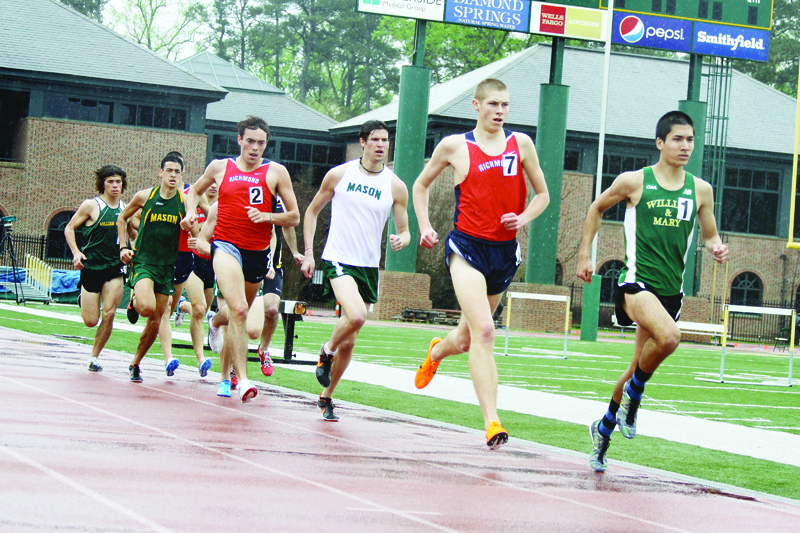 As senior Chris Tyson rounded the final curve of the third leg in the men’s 4×1500 meter relay, he saw what needed to be done. Roughly 20 meters separated Tyson from the leader. With a massive kick, the stadium announcer excitedly pointed everyone’s attention to the baton hand-off. William and Mary had just overtaken Michigan entering the final leg.

That lead was all the Tribe would need, as sophomore Rad Gunzenhauser took the baton and the surge of momentum all the way to the finish line, holding off a late Michigan charge. The College took the race in 15 minutes, 49 seconds, just ahead of Michigan’s 15:50.92 mark.

“Michigan normally has some good guys, so I figured if we wanted a chance to win, I have to put Rad, who was anchoring for us, in a good position,” Tyson said. “I was feeling good enough to make up some ground and was able to do so.”

Director of track and field Stephen Walsh was also impressed with Tyson’s finish, and noted the difficulty of the event.

“[Tyson] ran 44 seconds for his last 300, and he stuck in there and was just grinding away,” Walsh said. “That’s the beauty of the [4×1500 meter relay], it’s kind of confusing because you don’t really know where you are on the track sometimes, how far you have left to go and stuff. He just ground it out and timed it perfectly.”

The relay victory came at the end of a tough two-day stretch for Tyson, who competed in the 1500 meter run the day before. Tyson crossed the finish line at 3:46.69, a time good enough for fifth place and an IC4A championship qualifying time.

“It was a really fast race yesterday, a lot of really good guys,” Tyson said. “So my goal was to just get in the mix and hold on, and that’s pretty much how it went. I think I can go a little bit faster next time.”

Tyson’s busy weekend was indicative of the College’s effort across the board at the Colonial Relays. In a meet that featured an even 100 IC4A qualifying marks, the Tribe had numerous impressive individual efforts alongside solid team scores. The College’s men’s side tied for No. 14 overall with 27 points, while the Tribe women took No. 9 overall with 44 points.

The Michigan men and Villanova women won the team competitions with 167 and 152 points, respectively.

The women’s top-10 finish came largely from junior Natalie Baird’s individual efforts. With third-place finishes in both the discus and hammer throw coupled by a sixth-place finish in the shot put, Baird accounted for 15 of the teams 44 points.

“It’s been an enjoyable weekend,” Baird said. “Personally, I did best in the hammer this weekend. I was close to my PR in that. The shot and discus – I was hoping for a little better, but it’s the beginning of the season, so we’ll see.”

Baird opened the meet with a hammer throw of 47.60 meters, followed by a discus mark of 43.73 meters. As the defending conference champion took the field for her final event, the shot put, Baird appeared to show signs of a tired arm.

Nonetheless, her 12.53-meter put was good enough for a sixth-place finish.

“I thought it was a great meet, we had a lot of teams here and the weather was very conducive,” Walsh said. “We had some very good performances across the board on the men’s and women’s sides. It was a good weekend, with some really good events.”

With the last home meet complete, the Tribe hit the road for numerous away meets in preparation for the season-ending conference and NCAA finals.

“We had some solid things, now we just have to get some people healthy over the next three weeks and go forward,” Walsh said.

The Tribe competes in the Mason Spring Invitational at George Mason in Fairfax next weekend.