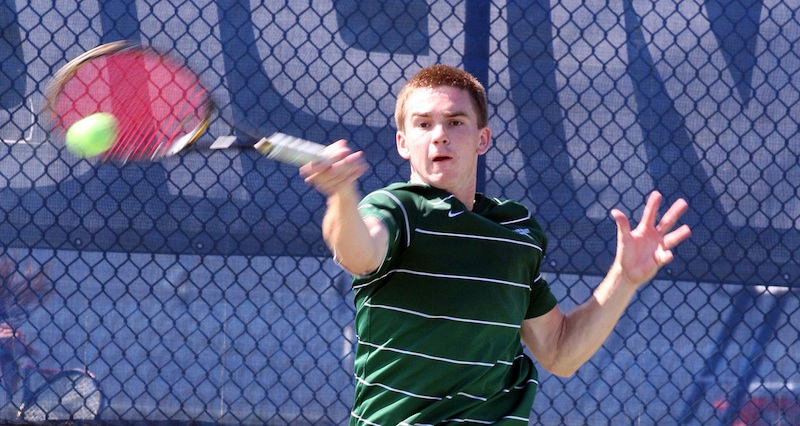 William and Mary entered its CAA quarterfinal match with aspirations of gaining an automatic qualification to the NCAA tournament by claiming the CAA crown. No. 42 UNC-Wilmington (16-5) put a quick end to the Tribe’s hopes by clinching the doubles point and amassing three quick wins in singles competition as the Tribe (10-16) fell, 4-0.

UNC-W quickly set the tone in doubles play, as UNC-W’s Pedro Mol and Kaue Pereira downed the Tribe’s duo of sophomore John Banks and graduate student Robert Pietrucha 8-1 at the No. 3 spot. The College’s No. 1 doubles tandem fared no better as junior Anton Andersson and freshman Will Juggins fell behind early and eventually dropped the match 8-2 to the Seahawks’s Chris Cooprider and Kosta Blank.

At the No. 2 doubles post, sophomore Ben Guthrie and senior Ilja Orre took a commanding 6-3 lead in the first set. Yet with the No. 1 and No. 3 matches already clinched by the Seahawks doubles point victory, Guthrie and Orre did not finish.

As singles matches got underway, the Tribe looked to end season-long struggles in the higher seeded courts. Guthrie opened up at the No. 2 position, hoping to defeat Cooprider.

Guthrie did finish, but not as successfully as his doubles outing. Cooprider easily handled Guthrie, winning the first set 6-4 before dominating the second set, 6-1.

Meanwhile, the Tribe’s No. 1 Andersson took on the Seahawks’ top player, nationally ranked No. 93 Raphael Aita. Unable to get any momentum, Andersson struggled in what would end in a 6-2, 6-2 defeat.

The No. 6 match suddenly took on much more significance. With three points, the Seahawks needed just one more singles wins to claim the overall victory. Orre led the cause for the Tribe, facing off against UNC-W’s Michael Reilly.

After dropping the first set 6-2, Orre fared slightly better in the second set. Reilly, however, would prove to be too much to handle, as Orre dropped the deciding set 6-3.

With Orre’s loss, the Seahawks clinched the team victory. With the team decision already decided, No. 3, No. 4, and No. 5 all ended unfinished.

At the No. 3 position, Pietrucha lost the first set 6-3 to Kosta Blank. In the second, Pietrucha again found himself in a deficit, down 4-1 prior to the calling of the match.

Banks, playing at the No. 5 position, had dropped the first set 6-3 before clawing his way back into the match in the second set. Banks tied the set up at three apiece against Pereira, and ended the match tied.

In the most interesting match, the No. 4 court went back and forth. Mol jumped to a 6-3 lead in the first set. The second set, however, saw Hoogland dominate play en route to a 6-1 set win. The match was called early in the tie-breaking third set, as Hoogland lead 1-0.

UNC-W would continue its run to the final, where top-seeded Virginia Commonwealth defeated the Seahawks 4-0 for the CAA title.