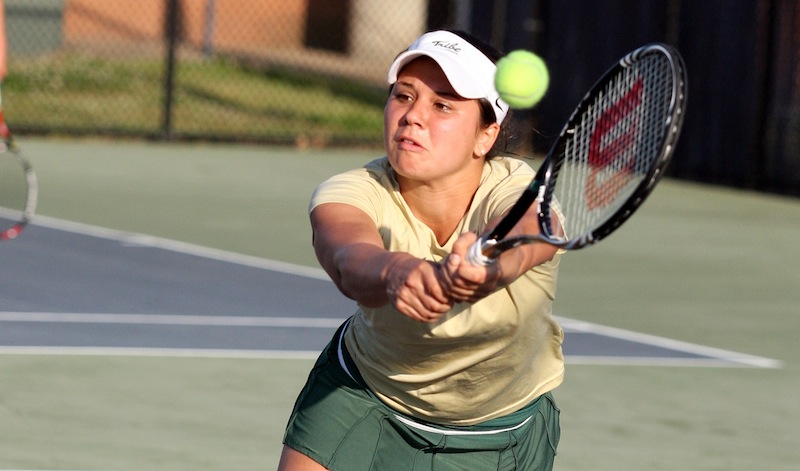 As they say, home field advantage always helps in the postseason. The Tribe learned this the hard way, losing a 4-3 heartbreaker to fifth-seeded Old Dominion in Norfolk in the first round of the CAA tournament. The loss ends the College’s 2011-12 campaign.

The Tribe struggled in doubles play, losing two of three matches to concede a point to the Monarchs at the beginning of the competition. The college’s doubles team of sophomore Hope Johnson and junior Jelje Loomans lost to ODU’s Diana Ivanova and Aleksandra Mitrovska, 8-3. Sophomore Maria Belaya and junior Anik Cepeda also lost an 8-6 contest to give ODU the doubles point.

The Tribe initially rebounded from their deficit in singles play, as No. 6 senior Katie Kargl crushed Faith Atiso, 6-1, 6-1, to even the match’s score at 1-1 and set the team on the right course. Kargl’s victory was her fourth singles win in her last five matches and the 15th of her successful final season.

ODU quickly responded with two straight singles wins. The first came in the No. 1 slot, as Ivanova earned her second victory of the day by defeating Belaya, 6-4, 6-4. Belaya, a first team All-CAA honoree, fell to Ivanova in their second meeting of the season.

The Tribe then fell behind 3-1 when the No. 4 Johnson lost in straight sets to Nika Khmolovska, 6-0, 6-4. Johnson’s defeat was her fourth straight to end the season, a challenging end to an otherwise strong sophomore campaign.

However, just as things were falling apart for the Tribe, it earned a crucial singles win when Loomans defeated Mitrovska, 6-2, 6-4, to earn a victory in the No. 2 spot. The win was Loomans’ sixth in her final seven singles matches, capping off the junior’s shining season.

The Tribe built on Loomans’ triumph when the No. 5 Cepeda grabbed a decisive win over ODU’s Juliana Pires, 6-1, 7-5. The win gave Cepeda an even 10 for the season and brought the College to the brink of victory with a 3-3 tie.

The entire quarterfinal came down to a tiebreaker, when No. 3 junior Nina Vulavic lost her singles match to the Monarchs’s Melissa Esnal Olguin by a score of 6-4, 7-6. The match sealed the 4-3 upset for Old Dominion in front of their home crowd in Norfolk, VA.

The loss dropped the Tribe to 6-16 on the season and eliminated it from the CAA tournament. Thus marked the end of a difficult season for the Tribe, one featuring injuries to multiple top players and a challenging out of conference schedule.