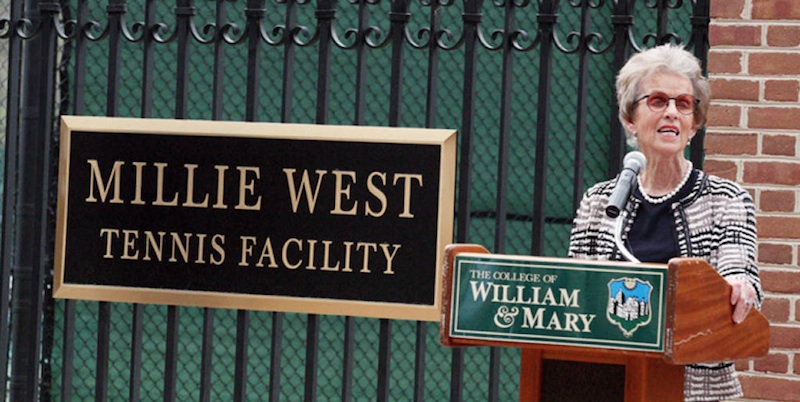 William and Mary’s athletic department kicked off its annual Celebration of Women Athletes April 14. Past Tribe greats — women and men — gathered at the Crowne Plaza in Williamsburg and the Muscarelle Museum of Art to honor achievements of female athletes and coaches at the College.

It was the third consecutive year the event was held, but this year, there was added significance. 2012 marks the 40-year anniversary of Title IX of the Education Amendments of 1972, a law that set in motion the overhaul of women’s collegiate athletics calling for the equal allocation of resources for men’s and women’s programs.

“The first thing that comes to mind [when thinking about Title IX] is providing equal opportunities for both male and female athletes,” junior women’s soccer player Mallory Schaffer said. “The law gives me the opportunity to play the sport that I love at the college level, whereas 40 years ago I would not have had this opportunity.”

Schaffer may not be far off the mark, considering that the College didn’t field a varsity women’s soccer team until 1981, the year the NCAA began administering women’s sports and schools started making their way over from the Association for Intercollegiate Athletics for Women.

Since then, both at William and Mary and nationwide, the rise of the sport has been, in some ways, the manifestation of Title IX’s potential. Here at the College, the women’s soccer program has quickly taken off, notching 24 NCAA tournament appearances (the third most in the nation) and 10 CAA championships. Athletic Director Terry Driscoll singled it out as one of the school’s most successful programs. Meanwhile, on the national stage, women’s soccer has grown by leaps and bounds as the women’s national team, since being formed in 1985, has far outperformed its male counterpart in international competition.

“I think it’s safe to say I aspired to be like Mia Hamm,” Schaffer said of the star of the 1999 World Cup winning national team. “And pretty much every player on that team. They were great role models, on and off the field.”

But soccer isn’t the only sport that was dramatically impacted by the 1972 legislation and subsequent rulings that require colleges and universities receiving federal funds to provide equal treatment for men and women in equipment and facilities, game and practice time, travel allowance, coaching salary, and tutoring for athletes and more.

Driscoll says the increase in opportunities for women has implications beyond the world of sports.

“The leadership, time management skills, and dedication at that high level … those were values that men walked away with that women couldn’t,” Driscoll said. “Those are values that are carried into business and professional settings.”

For Driscoll and head women’s basketball coach Debbie Taylor, though, there’s an understanding that the process of ending sex-based discrimination in college athletics has been a long, winding one that — were it not for people who fought in the courts and college boardrooms — would not have culminated in the strides that have been made.

Taylor came to William and Mary in 1982 as a student-athlete on the basketball team during that period when programs were shifting from the AIAW to the NCAA.

“When I first came to William and Mary, we traveled in vans everywhere we went,” Taylor said. “We’d go to Penn State, we’d take vans. We’d pack it in and we’d go, and we’d stay four people to a room.”

Both Taylor and Driscoll pointed to Millie West, who currently serves as the Director of Special Projects, as a woman who pushed the College’s administration into compliance with the letter and spirit of Title IX.

“Millie worked really hard to make all these things happen, and I don’t know how much the athletes now know who Millie is, but she moved mountains here for women’s sports in light of Title IX,” Taylor said.

“All the sudden we started taking buses,” Taylor said of West’s term and the introduction of the NCAA to women’s athletics. “That got things rolling and it’s been a step by step process along the way. But [today’s players] have no idea what it was like back then and the limited opportunity you had at that point in time compared to what they have now, thanks to the work of people like Millie.”

Taylor — who learned the game of basketball by playing with boys on the blacktops of Queens and Long Island, New York — saw the changes in women’s athletics up close during her time as player and coach. The women’s game has grown from being largely-ignored to nationally-televised, complete with superstars like Baylor’s Brittany Griner and UConn graduate Diana Taurasi (who now plays for the Phoenix Mercury of the WNBA). Since 2003, the NCAA women’s basketball tournament has been televised on ESPN and ESPN2. And the game’s expansion has not just come at the college level, but all the way down to elementary school. When the landmark legislation was enacted, roughly 295,000 girls played high school sports. By the 2010-2011 school year, that number was over 3 million.

“Now kids are playing AAU from the time they’re 10. When you were that age back then, there was nothing for you to do as a female,” Taylor said. “I was asked to play on the boy’s team in seventh grade. … Now little girls have visible role models because of media that they can look up to and emulate and want to be like. If you went back to the 70s and 80s, you couldn’t fathom the coverage on television.”

Still, Taylor cautioned that there’s still plenty of work to be done. According to the Women’s Sports Foundation, $148 million less is given in athletic scholarships to women than men. A 2011 New York Times report also uncovered that a number of colleges and universities have resorted to underhanded reporting tricks to make it appear as though they comply with the law.

“Obviously, great strides have been made, but there’s always more room to grow,” Taylor said. “It’ll be continuous growth during the years ahead, and people will be needed to lead the charge.”